America's Got Talent Wiki
Register
Don't have an account?
Sign In
Advertisement
in: Acts, Season 10 Acts, Animal Acts,
and 3 more

None
Einstein the Talking Parrot was a parrot act from Season 10 of America's Got Talent. It was eliminated in the audition round.

Einstein is an African grey parrot that was hatched in California in 1987. Knoxville Zoo obtained Einstein from a Californian couple in 1992. Since then she has been the star of Knoxville Zoo's Bird Show and a popular "spokesbird" for the zoo.

African grey parrots are one of the smartest bird species and are also known as one of the best talking/mimicking species. Einstein is extremely intelligent, even for an African grey. She has an extensive verbal vocabulary and is able to mimic animals and other sounds. It is believed her vocabulary exceeds 200 words and sounds. Of that, about 80 are on cue.

Einstein has been part of the Bird Show since its beginning in 1992. It is a free-flight, natural behavior show featuring about 14 birds and several other animals. Visitors have fun while learning about the various birds' habitats, adaptations and behaviors. Each bird displays natural behaviors during the show.

Through the years, Einstein has been featured on various television and radio shows all over the world. Her big break came on Animal Planet’s "Pet Star" in August 2004. Her impressive performance generated a buzz that lead to an appearance on the "Tonight Show with Jay Leno" on NBC.

Einstein has been recognized for her outstanding accomplishments. She was voted AnimalPlanet.com’s most popular Pet Star ever by fans visiting their Web site. She was also presented the Tourism Impact Award by the Knoxville Tourism and Sports Corporation for her work for the city in 2005.

The Bird Show runs April through September, Tuesday through Sunday during the season and on weekends after Labor Day until October. [1]

Einstein the Talking Parrot's audition in Episode 1005 consisted of imitating the sounds of her name, a car, a spaceship, lasers, a scream, and the words "Bad Bird" in a conversation with her trainer. Howard Stern buzzed the act. Atleast two judges voted 'No' eliminating the act from the competition. 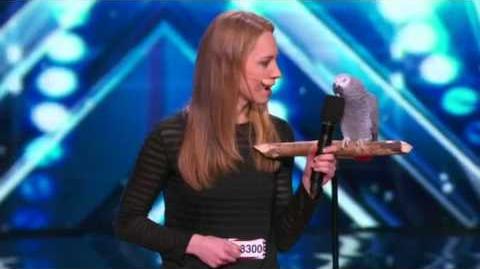