Elevenplay was a dance group act from Season 11 of America's Got Talent. It was eliminated before the Judge Cuts.

Eleven play, a group from Japan, consists of ten members, five of which would act as the main dancers in the group's audition. They traveled to the America's Got Talent show to share their performance with America.

Elevenplay's audition in Episode 1102 consisted of five women dancing in darkness as a group of drones with lights moved above and behind them. Howie Mandel, Mel B, Heidi Klum, and Simon Cowell all voted "Yes," sending the group to the Judge Cuts. 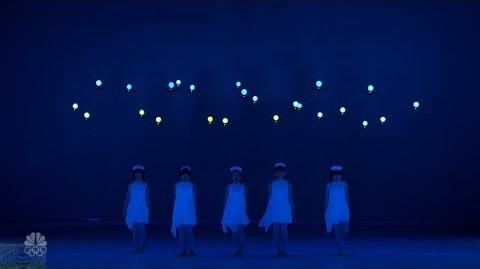 Elevenplay did not perform in the Judge Cuts due to withdrawing because of unforeseen delays. [1]

Retrieved from "https://agt.fandom.com/wiki/Elevenplay?oldid=90386"
Community content is available under CC-BY-SA unless otherwise noted.