America's Got Talent Wiki
Register
Don't have an account?
Sign In
Advertisement
in: Acts, Accepted Acts, Instrumentalists,
and 4 more

Withdrew
Elias & Zion Phoenix were a pianist duo act from Season 11 of America's Got Talent. They withdrew from the competition before the Judge Cuts.

Twin brothers Elias and Zion Phoenix both play piano, sing, dance, and rap and have been performing since they were 5 years old. Elias has won International competitions and performed at Carnegie Hall 4 times. Zion is an award winning artist, has written a science book, and recently published an album of his original songs he recorded himself. Elias & Zion have been featured on America’s Got Talent, The Ellen DeGeneres Show, Superkids, TEDx, and performed at Carnegie Hall. [1]

Elias & Zion Phoenix's audition in Episode 1104 consisted of playing "Flight of the Bumblebee" on the piano together. Howie Mandel, Mel B, Heidi Klum, and Simon Cowell all voted "Yes", sending the duo to the Judge Cuts. 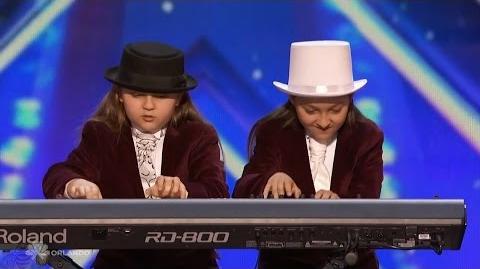 Elias & Zion Phoenix did not perform in the Judge Cuts round because they had a prior commitment out of the country when the round was taped. [2]