Judge Cuts
Enra was a videomapping dance duo act from Season 10 of America's Got Talent. It was eliminated before the Judge Cuts.

‘ENRA’ is a visual dance performance troupe from Japan performing animation-based digital performances. The images used in the performances are not attuned to the dancers, but interactively staged. The members of ENRA are experts in genres including martial arts, gymnastics, ballet, animation dance, juggling and street dance. The duo consists of Maki Yokoyama and Saya Watatani who work with team supervisor Nobuyuki Hanabusa.

Maki Yokoyama is from Matsumoto City, Nagano Prefecture. Since she was 8 years old, she devoted herself to rhythmic gymnastics. She has always admired the musical stage and relocated to Tokyo after graduating from high school. There she started her studies in music at Butai Geijyutsu Gakuin. She learned various forms of dance, from ballet to jazz, modern, tap, contemporary dances, as well as acting. She found acting quite fascinating because she played the main role at small theaters after graduation. She then met Tsuyoshi Kaseda and began Chinese martial arts. Yokoyama later joined the team of Spinnin Ronin Japan and has been an active member ever since. As a strong believer of the unlimited potentials of physical expressive arts, she wishes to impress the audience with dynamic and powerful performances that reflects her expressive skills cultivated by long years of rhythmic gymnastics.

Saya Watatani was born in Takarazuka city, Hyougo, Japan. She started ballet when she was three years old. In high school, she developed an interest in both modern and traditional art. While studying acting, Nichibu (Japanese traditional dance), and Kyougen (Japanese comic theater), she also had the opportunity to study acting under the distinguished Mr. Satoshi Akihama, a famous Japanese playwright. In 2003, she entered Osaka Art University and majored in theater. She later got the once in a life time chance to work with with Jeffrey Daniel, Michael Jackson’s personal choreographer. In 2010, she auditioned for Miss Universe Japan. There were four thousand competitors, but she was chosen as one of the finalists and ranked 6th. By 2012, she was invited to the 11th Gangneung International Junior Art Festival performance in Korea, and took part in the Anaheim International Dance Festival 2012’s Gala performance in California. [1]

Enra's audition in Episode 1006 consisted of dancing as a duo to HAIM's "Falling" as lights and sparkle effects were projected on a wall behind them. Howard Stern, Heidi Klum, Mel B, and Howie Mandel all voted "Yes," sending the duo to the Judge Cuts round. 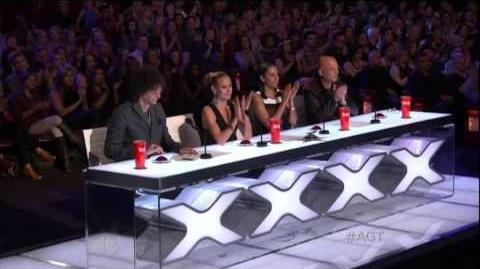 Enra did not perform in the Judge Cuts round, meaning they either withdrew or were cut by the judges before this stage of the competition.