America's Got Talent Wiki
Register
Don't have an account?
Sign In
Advertisement
in: Acts, Season 4 Acts, Accepted Acts,
and 10 more

Semifinalist
Erik and Rickie were a ballroom dancer duo act from Season 4 of America's Got Talent. They were eliminated in the Semifinals.

Erik Linder and Rickie Taylor have been ballroom dance partners since they were 4. They met in a dance class just by chance and by the age of 5 they danced in our first competition. They are "Ten Dancers" - which means that we compete in Waltz, Tango, Viennese Waltz, Foxtrot, Quickstep, Cha Cha Cha, Samba, Rumba, Pasodoble and Jive. Erik and Rickie have danced on the Oprah Show and Dancing with the Stars. They have been National Champions five times and have competed on the United States Team in Blackpool, England many times. Recently they trained and performed at the United States Olympic Training Center in Lake Placid, New York with a scholarship from USA Dance, Inc. In addition to competing, Erik and Rickie enjoy performing and sharing their experiences as they travel and connect with kids and adults around the world. 1

Erik and Rickie's audition in Episode 402 consisted of a ballroom dancing routine to Tina Turner's "Proud Mary". Piers Morgan, Sharon Osbourne, and David Hasselhoff all voted "Yes," sending the duo to the Vegas Round. 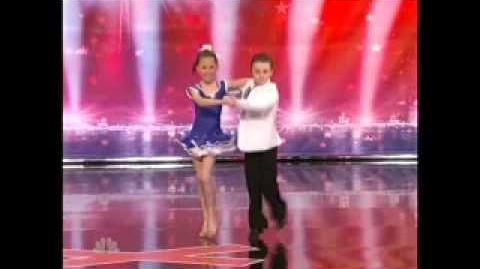 Erik and Rickie appeared without performing in the Vegas Round. The duo's audition was strong enough for the judges to send it to the Quarterfinals in Episode 411 along with G-Force.

Erik and Rickie's Quarterfinals performance in Episode 419 consisted of a ballroom dancing routine to "España Cañí." Sharon Osbourne and David Hasselhoff gave them standing ovations. Erik and Rickie finished in fifth or sixth place in America's Vote. In the Judges' Choice, although Sharon Osbourne did not vote for the duo, Piers Morgan and David Hasselhoff did, sending it to the Semifinals in Episode 420 instead of Mia Boostrom. 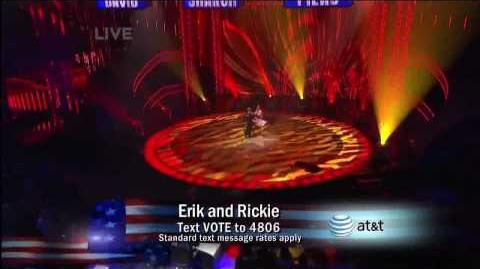 Erik and Rickie's Week 2 Semifinals performance in Episode 423 consisted of ballroom dancing to Michael Jackson's "Black or White." Piers Morgan buzzed the act. Erik and Rickie did not receive enough votes to be sent to the Finals, eliminating the duo from the competition in Episode 424 along with Jeffrey Ou.

Erik would later audition again in Season 16 as apart of Erik and Shelly Linder where they would be eliminated in the audition round.