America's Got Talent Wiki
Register
Don't have an account?
Sign In
Advertisement
in: Acts, Accepted Acts, Vocal Groups,
and 7 more

Final Draft is a billboard charting, award winning guy group comprised of Dnyce, Lucky, Voice, and Divine. Final Draft charted #1 on Billboard for R&B single sales, won a GA Music Award for Best R&B group, and most recently received an award for high sales of Spaced Out Magazine in which Final Draft graced their first cover in major bookstore chains. They are currently in the studio with legends and have a diverse (Country Music & Latin) love for music. Final Draft writes and produces. They are going in the studio to record with Country Music Hall of Famer Ronnie Milsap on his anniversary album.

Final Draft has graced tons of red carpet, been invited to top elite events, and major write ups in major publications. Final Draft has also been booked for tributes to legends like James Brown, Temptations, and more. Final Draft and Earl Jam Productions use the sales from Final Draft single sales to fund their annual “I Can Do This School Tour” in which they provide school supplies along with promoting healthy eating, saying no to violence, and why graduating from school is important. In doing this, they use entertainment and sports to leave an impression. Final Draft has done a lot of charity work in which they have received their own “Final Draft Day” along with multiple proclamations from different cities throughout the United States. Final Draft packed out a crowd and sold out merchandise in Canada and was positively featured on Shaderoom with over 600,000 hits. Final Draft most recently performed at World Changers Church International for a special Mother’s Day tribute that was aired on television nationally. [1]

Final Draft's audition in Episode 1205 consisted of singing James Brown's "It's a Man's Man's Man's World" as a group. Howie Mandel, Mel B, Heidi Klum, and Simon Cowell all voted "Yes," sending the group to the Judge Cuts.

Final Draft's Judge Cuts performance in Episode 1209 consisted of singing Keane's "Somewhere Only We Know" as a group. The group's performance was not strong enough for the judges to send it to the Quarterfinals, eliminating it from the competition along with 5 Alive.​​ 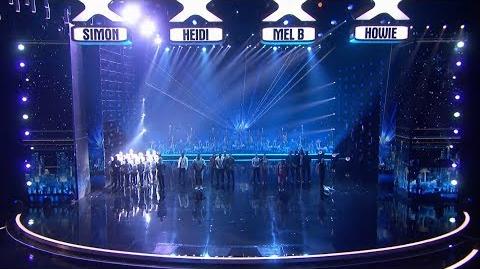