None
Frank Simon was a chin balancer act from Season 1 of America's Got Talent. He was eliminated in the audition round.

Frank Simon was from Budapest, Hungary. He has learned how to balance a variety of objects on his chin, head, and face. Examples of objects Frank can balance comprise of a penny on a toothpick, dishwasher, refrigerator, a Blackberry on a pencil, and more. As seen in the audition, his catchphrase is, “Everybody clap for me!”, which he shouts right before he balances an various object.

Frank Simon's audition in Episode 102 consisted of balancing a motorbike and a stove on his chin. The audience loved his act but Piers Morgan, Brandy Norwood, and David Hasselhoff all buzzed him. All three judges voted "No," eliminating Frank from the competition. Piers stated toward the end of his audition, "This is a talent show, not a freak show." This comment was followed by a loud boo from the audience. 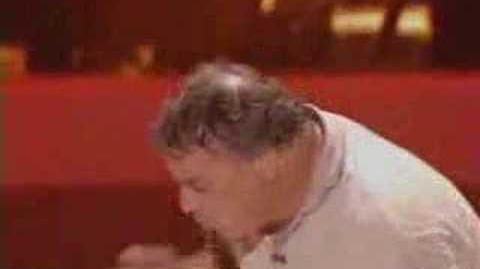