America's Got Talent Wiki
Register
Don't have an account?
Sign In
Advertisement
in: Accepted Acts, Acts, Magicians,
and 3 more

Franklin Saint was a magician act from Season 9 of America's Got Talent. He was eliminated during Judgment Week.

Franklin Saint works as a court process server. Franklin has been running a business as a entertainer for business people. "In ya face magic" has been in business since 2009. Franklin began learning the traditional craft of magic ten years before his audition mostly through books. He did not have a mentor like most magicians; he is completely self-taught. He quickly gained an understanding of the core principals of magic and continued implementing those techniques and theories with friends and family then eventually on the street performing for strangers. He quickly realized that he didn't require special props or gimmicks to create a magical moment. The majority of his presentation is completely organic, and if it does not appear real, he will not present it.

Franklin has moved from the close-up realm into performing parlour and stage magic. This presents a difficulty due to his personal style of keeping his performance real and organic. It is this realism that has led him to a semifinal spot in a Spanish-speaking TV contest, Tengo Talento Mucho Talento, in which he beat three magicians.

A project Franklin is developing for the Spanish-speaking community is TV magic special where Franklin visits under-privileged children across the nation and brings the magic to them. 1

Franklin Saint's audition was never televised, though a flashback revealed that it featured Franklin bending a fork's prongs seemingly with his own energy. In the comments to a video posted to his YouTube channel consisting of him auditioning for "Tengo Talento Mucho Talent" and making it through to the next round with 3 "Yes" votes from every judge, he stated in a reply to a comment that his AGT audition couldn't be aired, but was similar to the routine done in this audition [1]. It is unknown whether or not he was buzzed, but at least three judges voted "Yes," sending Franklin to Judgment Week.

Franklin Saint was sorted into the "Magicians" category in Judgment Week. His performance in Episode 907 consisted of creating the illusion of compressing a water bottle, un-crushing an empty soda can, and sealing the soda can, now newly filled with soda, all with his own mental energy. Franklin's performance was not strong enough for the judges to send him to the Quarterfinals, eliminating him from the competition in Episode 908. 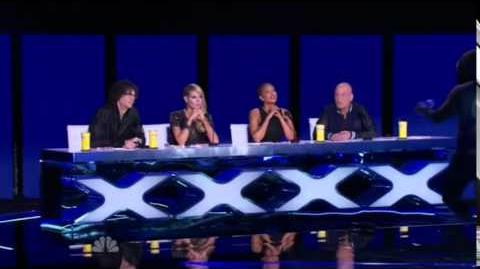