Judge Cuts
French Accent was an accordionist and stand-up comedian act from Season 13 of America's Got Talent. He was eliminated before the Judge Cuts.

Head spinning in a caffeinated fugue, Kevin Bennett once found himself shredding down a Martian ski slope with a thousand irate Nephilim howling in his wake. On the way, he rescued twenty damsels, had lunch, and fully calculated Pi. In close company, he goes by “Bennett,” but he moonlights as an accordion-bearing comedian with an eye-patch and a beret, who goes by “French Accent" (the first initials of Francois Raphael Edgar Norbert Celestine Hebert Absalom Correntine Clement Emmanuel Nathaniel Tellus, IV). He entertains any crowd, be it young, old, clean or "adult". His technique involves regular crowd participation and a musical element with no contemporary parallel. [1]

French Accent's audition in Episode 1305 consisted of performing a stand-up comedy routine with puns and wordplay, including talking about how he is "ruthless" because he was dumped by a woman named Ruth, how she was dumped by a man named Doug and how she’s now "Douglas", how it’s not good to date a woman named Grace because she is clumsy ("graceless"), and how he needs to return a stolen cat because he is a "cat burgalar". Mel B, Heidi Klum, and Simon Cowell all buzzed the act. However, Mel and Heidi both took back their buzzes back at the end of the performance. Although Simon voted "No", Howie Mandel, Mel, and Heidi all voted "Yes", sending French Accent to the Judge Cuts. 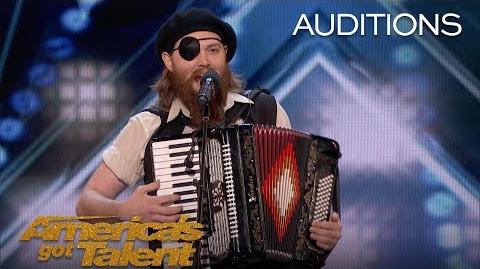 French Accent did not perform in the Judge Cuts round. He stated that he was cut from the show before the round began. [2]