Judge Cuts
Gary Sladek was a daredevil hand balancer/trampolinist act from Season 11 of America's Got Talent. He was eliminated in the Judge Cuts.

Gary Sladek is from North Babylon, New York. He comes from a theater family, and he has been performing acrobatic hand balancing stunts for over four decades. He has been a featured NBA Halftime Entertainer as the The Amazing Sladek. He claims to be America's Oldest Daredevil Acrobatic Hand Balancer. [1]

Gary Sladek's audition in Episode 1102 consisted of building a stack of wooden chairs, climbing to the top of the resulting tower, and performing handstands on the top of the stack. Howie Mandel, Mel B, Heidi Klum, and Simon Cowell all voted "Yes," sending Gary to the Judge Cuts. 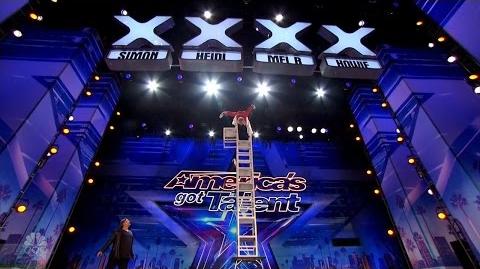 Gary Sladek's Judge Cuts performance in Episode 1108 consisted of performing acrobatics and comedy on a large trampoline, ending with him and Broadway Jim wearing dresses, all in a danger routine based on a criticism Heidi gave them about the outfits they wore in his first audition. Howie Mandel and Simon Cowell buzzed the act. Gary's performance was not strong enough for the judges to send him to the Quarterfinals, eliminating him from the competition instead of Deadly Games. After the performance, the other judges accused Heidi of ruining his act and she splashed her cup of water on Simon's pants. 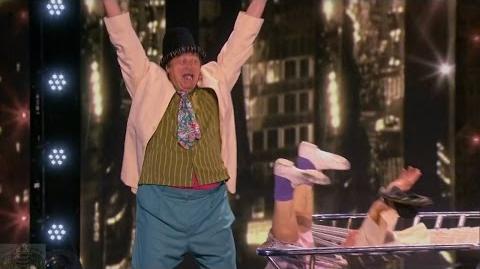 In 2022 Gary Sladek competed under the name "The Amazing Sladek" on the second season of the TBS competition series Go Big Show, in which he advanced to the semifinals where he was eliminated in a three-way match-up in which he lost to motorcyclist James Carter.