America's Got Talent Wiki
Register
Don't have an account?
Sign In
Advertisement
in: Acts, Dance Duos, Rejected Acts,
and 6 more

None
Gem City Jewels was a dancing vocal duo act from Season 10 of America's Got Talent. It was eliminated in the audition round.

Anjahlai Harrison (the Diamond) and Teona "Ms. Kivey Kisses" Miller (the Ruby) make up the Gem City Jewels. They are from Dayton, Ohio. [1]

Gem City Jewels' audition in Episode 1007 consisted of dancing and singing a song about diamonds and shaking haters off. Howard Stern, Heidi Klum, Mel B, and Howie Mandel all buzzed the act. All four judges voted "No," eliminating the duo from the competition. After the performance, Nick Cannon (as the Sapphire) joined the duo for an encore. 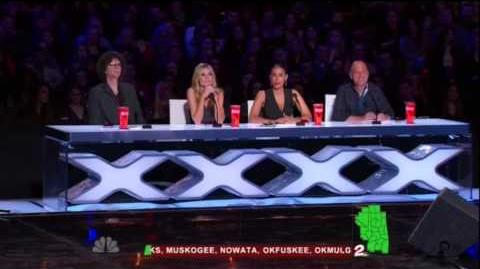