George the Giant was a sideshow performer act from Season 3 of America's Got Talent. He was eliminated in the Quarterfinals.

George The Giant stands at an impressive seven foot three inches in height. After debuting as a sideshow performer in 1991, George the Giant appeared as Colossus in Tim Burtons movie "Big Fish" and also appeared in the movies "Tough Luck", "Firecracker", or "Relative Strangers" and television shows "The Tonight Show," "Touch By An Angel", "The Guardian", "The Strip", or "According To Jim." He has also appeared on CNN, The Learning Channel, The Discovery Channel, and The Travel Channel.

He was born and raised in a small city near Los Angels called Bakersfield. When at the age of twelve he was taken to the county fair where he witnessed a sword swallower and fire-eater perform on the bally stage. George could barely believe what the human body could accomplish. It wasn't until George was twenty-one before he started to learn the sideshow art. That path was started when a family tragedy caused him to have a fear of fire. He decided he would over come his fear the same way he over came his fear of heights... head on. In the case of his fear of heights he bungee jumped, for this of fire, he would learn fire eating. While researching fire eating he discovered descriptions of other sideshow stunts and started learning them also.

George has had the opportunities to travel around the world performing his brand of entertainment in all types of venues from nightclubs to libraries. He has also been in publications ranging from "The National Enquirer" to "Vogue." George hopes for his audience to keep dreaming big. 1

George the Giant's audition in Episode 303 consisted of drinking milk through a long straw he put through his nasal passage, and then setting firecrackers off on his torso. Piers Morgan buzzed the act. Although Sharon Osbourne voted "No", Piers and David Hasselhoff both voted "Yes", sending him to the Vegas Round.

George the Giant was sorted into the "Extreme Performers" category in the Vegas Round. His performance in Episode 308 consisted of his assistant breaking two blocks of concrete on his back with a sledgehammer as he lay on a bed of nails. Geroge's audition was strong enough for the judges to include him in the Top 60 shortlist and to later send him to the Top 40 Quarterfinals in Episode 309. 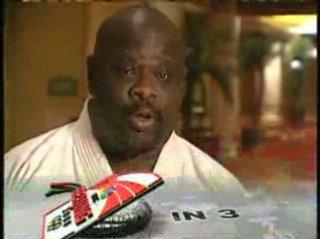 George the Giant's Part 2 Quarterfinals performance in Episode 311 consisted of of escaping from chains while hanging upside down on a hanger. During the performance, young children hit him with baseball bats as if he was a pinata, with candy even dropping from a bag attached to his chest in the middle of the performance. Piers Morgan and Sharon Osbourne both buzzed the act. Piers criticized George for being immature and embarassing. Sharon felt it was silly. David felt George's act is strange. Overall, judges felt this wasn't real talent. George did not receive enough votes to be sent to the Semifinals, eliminating him from the competition in Episode 312 instead of Daniel Jens. 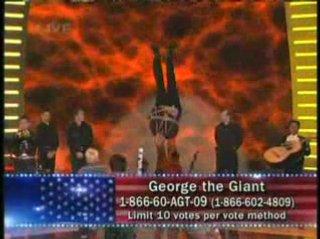 George the Giant was the first act buzzed by Sharon Osbourne in the live shows. 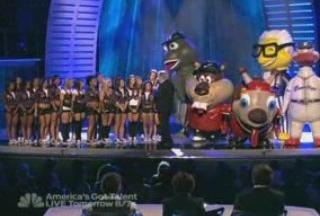 Retrieved from "https://agt.fandom.com/wiki/George_the_Giant?oldid=176203"
Community content is available under CC-BY-SA unless otherwise noted.