America's Got Talent Wiki
Register
Don't have an account?
Sign In
Advertisement
in: Acts, Danger Acts, Rejected Acts,
and 3 more

Godfrey Clan was a stunt group act from Season 10 of America's Got Talent. It was eliminated in the audition round.

The Godfrey Clan is a group of family and friends from Draper, Utah, who "know how to live life." They are relatives of the Nitro Circus producer and founder Gregg Godfrey. They made their fame from appearing in Thrillbillies, Nitro Circus 3D, and most recently Nitro Circus Live. [1]

Godfrey Clan's audition in Episode 1006 consisted of sliding down an enlarged Slip 'N Slide and flying through a flaming hoop. Howard Stern, Heidi Klum, Mel B, and Howie Mandel all voted "No," eliminating the group from the competition. 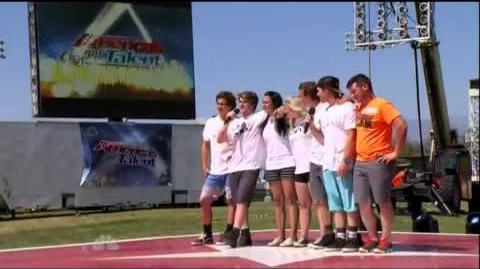