Judgment Week
Grennan the Green Monster was a knife thrower from Season 9 of America's Got Talent. He was eliminated before Judgment Week.

At his audition, Grennan was a third-grade student at Dayton Boy's Preparatory Academy. Grennan 'the Green Monster' Barlett-Nealeigh performs his knife-throwing act with his sister, Charlotte, a kindergarten student at Charity Early Adams Girls Academy alongside their parents, Thomas Nealeigh and Alice Bartlett, all over the country as a carnival style sideshow for the FreakShow Deluxe. He has been a professional sideshow performer since the age of five. 1

Grennan the Green Monster's audition in Episode 905 consisted of throwing knives at balloons being held by his father and then tossing knives around the outline of his father's body. Howard Stern, Heidi Klum, Mel B, and Howie Mandel all voted "Yes," sending Grennan to Judgment Week. 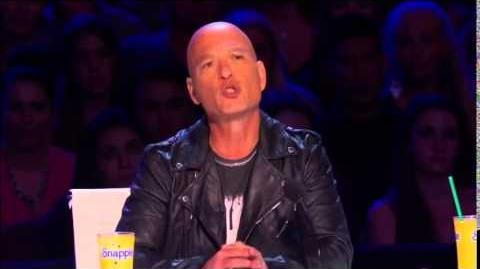 Grennan the Green Monster was not present during Judgment Week as he was never seen, meaning he either withdrew of was cut by the producers before this stage of the competition. Though, he was most likely cut, given the high rating of his act at his age.