Hairo Torres was a contortionist breakdancer act from Season 4 of America's Got Talent. He finished in the Bottom 5 of the Top 10.

Hairo Torres was born in southern California and raised in Grants Pass, Oregon. He began his dance journey at 13 and it has helped transform his life for the better. His parents never had a lot of money.

Hairo works two jobs—as a clerk at a video store and a clerk at a distribution plant— but has dreamed of making a living using the love and passion he feels for his craft. Despite the skepticism he has faced from family and friends over the years, he continued to practice and to perfect his dance moves. [1]

He auditioned for America's Got Talent to see whether he had what it took to be a successful performer.

Hairo Torres's audition in Episode 404 consisted of breakdancing and contorting his boy to perform feats such as using his jacket as a prop he jumped over and bouncing on his hands wiht his legs bent over his shoulders. Piers Morgan, Sharon Osbourne, and David Hasselhoff all voted "Yes", sending Hairo to the Vegas Round. 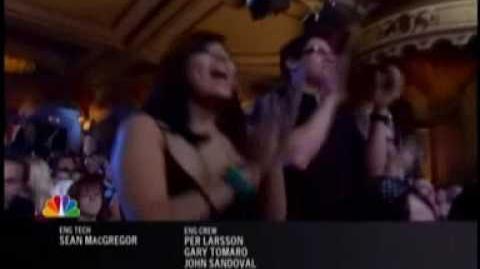 Hairo Torres appeared without performing in the Vegas Round. His audition was strong enough for the judges to send him to the Quarterfinals in Episode 411.

Hairo Torres' Quarterfinals performance in Episode 417 consisted of breakdancing and contorting his body to C+C Music Factory's "Gonna Make You Sweat (Everybody Dance Now)." Hairo received enough votes to be sent to the Semifinals in Episode 418 instead of G-Force and U4RIA Dance Crew.

Hairo Torres' Week 2 Semifinals performance in Episode 423 consisted of breakdancing and contorting his body to The Black Eyed Peas' "I Gotta Feeling" with a school dance theme. Hairo received enough votes to be sent to the Finals in Episode 424 instead of FootworKINGz. 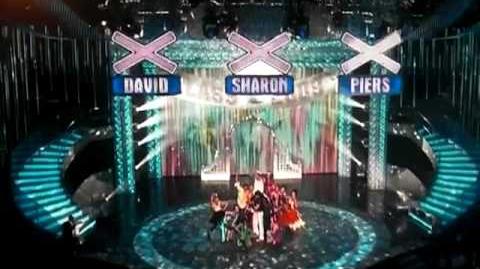 Hairo Torres' Finals performance in Episode 425 consisted of breakdancing and contorting his body to Ne-Yo's "Closer." He notably "took it back to the basics" by performing as a solo act with just his jacket. 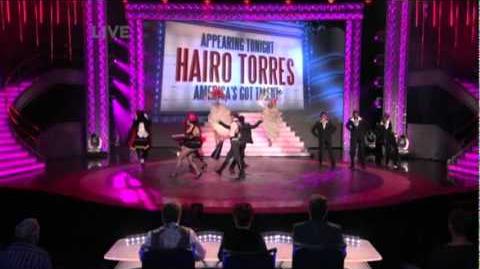 Hairo Torres did not receive enough votes to be included in the Top 5, eliminating him from the competition in Episode 426 instead of Barbara Padilla.

Retrieved from "https://agt.fandom.com/wiki/Hairo_Torres?oldid=78991"
Community content is available under CC-BY-SA unless otherwise noted.