Hamster Wheel were a kinetic artist trio act from Season 13 of America's Got Talent. They were eliminated before the Judge cuts.

Hamster Wheel consists of three members named Bryce, Christian, and Jason. They are from Minnesota, and the machine they used during their audition took about 300 hours to complete.

Hamster Wheel's audition in Episode 1306 consisted of presenting their Rube Goldberg machine, which ended with a hammer hitting a makeshift Golden Buzzer which sparked confetti to appear from behind it. Although Heidi Klum voted "No", stating she found the act boring, Howie Mandel, Mel B, and Simon Cowell voted "Yes", sending the act to the Judge Cuts. 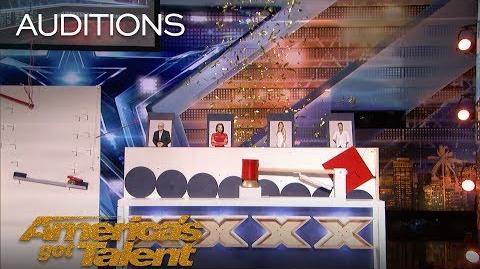 Hamster Wheel did not perform in the Judge Cuts round, meaning they either withdrew or were cut by the judges before this stage of the competition.

Retrieved from "https://agt.fandom.com/wiki/Hamster_Wheel?oldid=120020"
Community content is available under CC-BY-SA unless otherwise noted.