America's Got Talent Wiki
Register
Don't have an account?
Sign In
Advertisement
in: Acts, Accepted Acts, Dancers,
and 21 more

Quarterfinalist, Finalist
Hans was a singer from Season 13 of America's Got Talent. He was eliminated in the Quarterfinals. Hans returned for AGT: The Champions 2 where he finished in the Bottom 5 of the Top 10.

Boozier than Oktoberfest, more drive than a Volkswagen and with more sausage than a bratwurst convention, Hans is Germany’s proudest export. An international superstar, sex symbol, accordionist and Berlin boy-wonder, Hans has been thrilling audiences around the globe with his own fabulous brand of critically acclaimed cabaret for over a decade, performing for everyone from Prime Ministers to Princesses. Hans’ side-splitting shows have taken him all around Australia and across Europe and the UK and in 2018 he has hit the United States- appearing on NBC’s top rating TV show America’s Got Talent. Hans real name is Matt Gilbertson. [1]

His most recent productions, Viva Hans Vegas (2016), Mein Camp (2017) and If You Don’t Love Me…Leave! (2018) have all been praised by audiences and critics alike, being named Best Cabaret at the Edinburgh Fringe Festival by UK’s The Sun newspaper, and winning Best Cabaret awards at both the Adelaide and Perth Fringe Festivals. Hans was also named “Pick Of The Fringe” at the Adelaide Fringe awards in 2018. [2]

Hans' audition in Episode 1303 consisted of singing Tina Turner's "Proud Mary," dancing, and playing the accordion. He finished the performance by performing a split, balanced on two chairs. Howie Mandel, Mel B, Heidi Klum, and Simon Cowell all voted "Yes," sending Hans to the Judge Cuts. 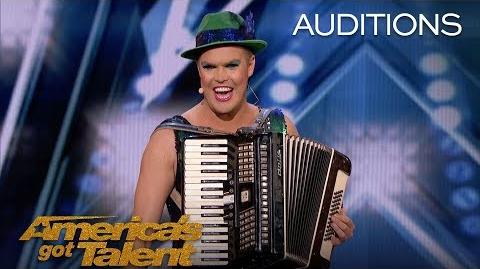 Hans' Judge Cuts performance in Episode 1308 consisted of singing The Weather Girls' "It's Raining Men" while dancing and playing the accordion. His performance was strong enough for the judges to send him to the Quarterfinals. 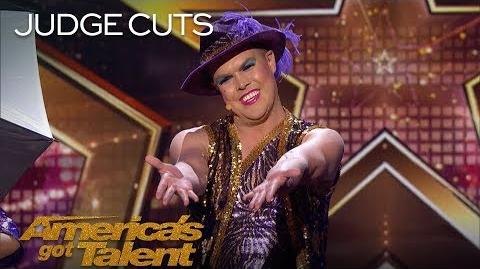 Hans' Week 3 Quarterfinals performance in Episode 1315 consisted of singing "Spice Up Your Life" by the Spice Girls while tap dancing and playing the accordion and piano. Howie Mandel, Mel B, Heidi Klum, and Simon Cowell all gave him standing ovations. Hans did not receive enough votes to advance to the Semifinals in Episode 1316, eliminating him from the competition instead of Us the Duo. 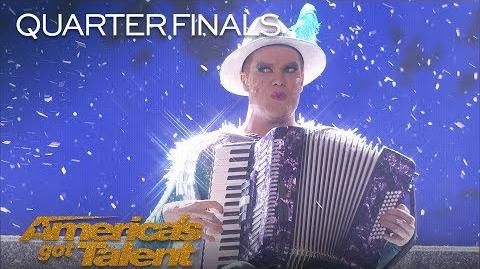 Hans' Preliminary performance in Episode TC201 consisted of singing "Juice" by Lizzo while tap dancing and playing the accordion. Simon Cowell buzzed the act.  Hans finished in 3rd, 4th or 5th place in the Superfan Vote.  In the Judges' Choice, he received enough votes (from Heidi Klum and Howie Mandel) to advance to the Semifinals instead of Junior Creative and Jack Vidgen.

In Episode TC207, Hans introduced a mash-up performance consisting of Duo Transcend, Boogie Storm, Marcelito Pomoy and Sandou Trio Russian Bar. He did not receive enough votes from the Superfans to enter the Top 5, eliminating him from the competition instead of V.Unbeatable.

In 2019, Hans contributed to the recap videos for Talent Recap's YouTube channel during The Champions, picking the top 3 moments of the week during each preliminary episode.

Hans served as a guest judge during the Australia's Got Talent Season 9 Semifinals, giving his Golden Buzzer to opera/rock singer Jennifer Anderson. One of the other acts he judged was fellow Season 13 act Lioz Shem Tov, who was the second act to move on that night.