Judge Cuts
Harold & Regan were a dance duo from Season 13 of America's Got Talent. They were eliminated in the Judge Cuts.

Harold Rancano and Regan Hirose, are a Latin dance couple best known around the world for their energetic, and acrobatic flair on stage. Based out of Winnipeg, Manitoba, the flavorful couple has achieved plenty of success on a national and international level. Most notably being the first Canadians to become champions in the Bachata Cabaret division at the World Latin Dance Cup in Miami, Florida; and the Canadian Bachata Champions at the Canada Salsa Congress in Toronto, Ontario. The couple has also competed and won various competitions in San Francisco, Los Angeles, Calgary, and Saskatoon in the “Salsa on 2” and “Bachata” divisions.

Aside from competition, the duo also directs Cubanisimo Dance Company in their hometown, where they train and coach their teams. They also coach various teams outside of the city, 3 of which have won gold at the World Latin Dance Cup. Along with their company, the two also teach a weekly Bachata and Salsa class.

Also known for their connection and unique choreography, the couple has travelled to several congresses to share their vast knowledge of styles and various Latin rhythms. Such as Salsa on 1, Salsa on 2, Bachata, Pachanga, Cuban Salsa, Cha cha cha, and Lifts & Tricks. Whether it’s privates, group classes or to coach teams, the couple has the experience to adapt to any teaching environment. [1]

Harold & Regan's audition in Episode 1304 was not televised, and neither was their verdict. However, at least three judges voted "Yes", sending them to the Judge Cuts. 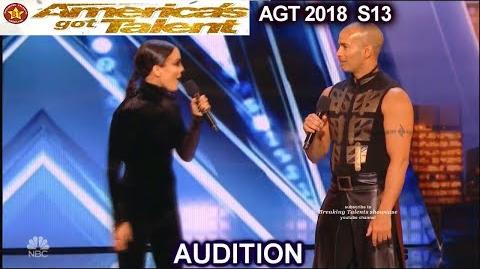 Harold & Regan's Judge Cuts performance in Episode 1307 consisted of performing a dance in which Harold tossed Regan in the air multiple times while she did flips. Harold and Regan's performance was not strong enough to send them to the Quarterfinals, eliminating them from the competition along with Celina and Filiberto, Andrew Johnston, and Kevin Blake.