Howard Michael Mandel was born in Toronto, Canada on November 29, 1955.

Mandel also serves as executive producer of many shows with his production company, Alevy Productions, including the TBS series "Deal with It," which recently wrapped its second season. "Deal With It" is a hidden-camera ambush show where unsuspecting members of the public are secretly dared to pull a prank on their unwitting companions with absolutely no time to prepare.

Mandel's versatile career has encompassed virtually all aspects of the entertainment spectrum, including television, film and stage. From his work on the Emmy Award-winning "St. Elsewhere" to the international animated children's series "Bobby's World," Mandel has become a mainstay of the American comedy scene. In 2009, Mandel added author to his resume when he released his frank, funny, no-holds-barred memoir "Here's the Deal: Don't Touch Me." The memoir revealed his ongoing struggle with OCD and ADHD, and how it has shaped his life and career. It made the New York Times best-seller list in its first week and remained on the list for several consecutive weeks.

Mandel started his career on a dare during a trip to Los Angeles in 1979. He was at the legendary Comedy Store on amateur night and was coaxed by friends to get up and try his luck. As fate would have it, there was a producer in the crowd who immediately hired him to appear on the comedy game show "Make Me Laugh." His appearance on the show led to talk-show appearances, a stint as Diana Ross' opening act and eventually to the award-winning NBC drama "St. Elsewhere," where Mandel spent six seasons as Dr. Wayne Fiscus.

Mandel's Emmy Award-nominated animated children series "Bobby's World" ran for eight seasons and now appears in syndication six days a week in 65 countries. As the series creator and executive producer, Mandel was closely involved in its writing and provided the voice of Bobby, Bobby's dad and other characters. Mandel attributes the show's success to drawing the storylines from real life.

Mandel has done countless comedy specials both on cable and network television. He has also hosted his own syndicated talk show, "The Howie Mandel Show," and continues to be a mainstay on the talk-show circuit. Mandel also continues to perform as many as 200 concerts a year throughout the U.S. and Canada.

He lives in Los Angeles with his wife Terry and their three children. [1]

On October 26, 2021, Mandel was announced as one of the members of the judging panel for the second season of Canada's Got Talent along with music artist Kardinal Ofishall, retired pro wrestler Trish Stratus and comedian Lilly Singh. The series begins airing in 2022.

Joining as a Judge

Howie messed up the most out of all the judges in their first day. It is proven when he accidently buzzed Ranses Vallentt twice when Ranses walked on the stage and when Piers was explaining why Ranses was buzzed by all judges. As he becomes more comfortable as a judge he has been annoying Piers for two straight seasons. Such as doing pranks. He is one of the only judges who shows what he does when he is preparing for the show and backstage. 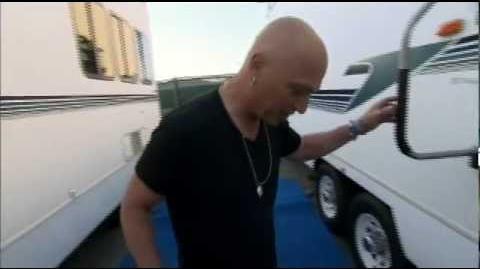 Howie is a very comedic judge, he often is making constant jokes and making others laugh. When he first started Howie liked the crazy and whacky acts, However, Howie has become a lot more tougher over the years and he is currently the second most strict judge on the panel.

Howie never likes it when someone touches him as he is afraid of germs. He once told Sharon not to touch him when he had a blackhead since she touches a lot of people in the crowd. He once also buzzed Frank Olivier since he touched Howie as support for him to ride on a unicycle.