Human Slinky was a novelty act from Season 2 of America's Got Talent. He was eliminated in the audition round.

The Human Slinky's name is Veniamin. He is from Romania and lives in Orlando, Florida. With appearances on TV Shows all over the World and mystifying audiences everywhere you just have to see him perform. This unique act has appeared on the Late Show with David Letterman, Britain's Got Talent, The View, Viva Variety, BBC and ITV UK, NTV Tokyo Japan and other Television shows all over Europe, Asia and South America. Millions of people have seen Human Slinky's live performances at Sea World Orlando Florida, Mad Tea Party in Disney California Adventure Park, Madagascar Live at Samsung Everland Adventure Park in South Korea, or Gardaland Park at Lake Garda in Italy. David Letterman was so impressed with this unique act, he said, "Get ready for 3 minutes of bizarre television, even by CBS standards!"

"Human Slinky" was the winner of the Greatest Show on Earth "Rio Carnival 2012", featured in the world oddities book "Ripley's Believe It Or Not!: Prepare to Be Shocked!". He also won the "WALT DISNEY Special Prize" at the 24th International Circus-Festival of Monte-Carlo 2000, the title of "Most Original Act" at 3rd World Festival of Circus in Moscow 2007, and the award for Best Variety Act 2008 at the Hollywood Best New Talent Awards. 1

Human Slinky's audition in Episode 201 consisted of dancing in a large Slinky costume. Piers Morgan, Sharon Osbourne, and David Hasselhoff all buzzed the act. All three judges voted "No," eliminating him from the competition. 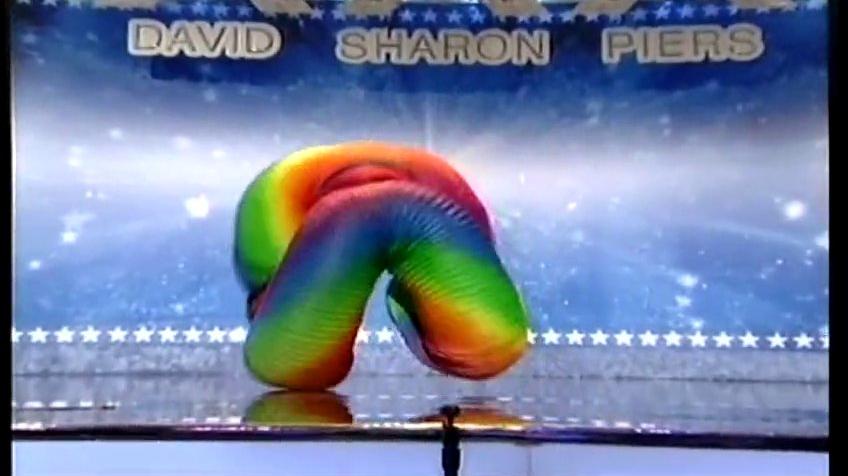 Retrieved from "https://agt.fandom.com/wiki/Human_Slinky?oldid=173461"
Community content is available under CC-BY-SA unless otherwise noted.