America's Got Talent Wiki
Register
Don't have an account?
Sign In
Advertisement
in: Acts, Accepted Acts, Danger Acts,
and 5 more

Judge Cuts
Ian Stewart was a crossbow sharpshooter act from Season 11 of America's Got Talent. He was eliminated in the Judge Cuts.

Ian Stewart is from Truro, Nova Scotia. In addition to being a sharpshooter, he is also a comedic hypnotist. Having performed throughout North America, Ian boasts an impressive track record of over 1500 successful performances. [1]

Ian Stewart's audition was never televised. However, it is known that Howie, Heidi, Mel B, and Simon all voted "yes", sending Ian to the judge cuts.

Ian Stewart's Judge Cuts performance in Episode 1109 consisted of first shooting a balloon by his assistant's hand. Next, he shot at a target causing a set-up chain reaction which eventually shot through his legs as he stood on a balance board. Mel B buzzed the act. Ian's performance was not strong enough for the judges to send him to the Quarterfinals, eliminating him from the competition along with Mason Bumba, instead of Ryan Stock & AmberLynn. 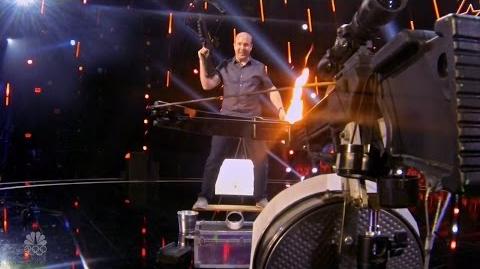 Ian Stewart was a contestant on Season 5 of Penn & Teller: Fool Us. He did not fool the duo.

Ian Stewart was a contestant on Georgia's Got Talent in 2021. He was eliminated in the live shows.

Ian Stewart was a contestant on Season 2 of Canada’s Got Talent in 2022 where he was eliminated in the deliberations.