America's Got Talent Wiki
Register
Don't have an account?
Sign In
Advertisement
in: Acts, Season 1 Acts, Accepted Acts,
and 8 more

Semifinalist
J.R. Johns & His Best Friends was a dog act from Season 1 of America's Got Talent. It was eliminated in the Semifinals.

Veteran dog trainer and physical comedian J.R. Johns and his rescued partners bring to the stage a wild romp through everything that is humorous and endearing about dogs. J.R. has the ability to allow his canine partners to actually develop as characters then interact with them as the continuous brunt of their pranks on stage. [1]

J.R. Johns & His Best Friends's audition in Episode 101 consisted of J.R.'s dogs performing handstands, walking on their hind legs, and hopping over J.R. Piers Morgan, Brandy Norwood, and David Hasselhoff all voted "Yes", sending the act to the Semifinals.

J.R. Johns & His Best Friends' Semifinals performance in Episode 104 consisted of performing magic tricks with his dogs such as creating the illusion of dogs changing clothes behind a curtain. Piers Morgan, Brandy Norwood, and David Hasselhoff all gave J.R. "X" votes. J.R. did not receive enough votes to finish in at least second place in America's Vote, eliminating him from the competition in Episode 105 instead of All That! and Taylor Ware. 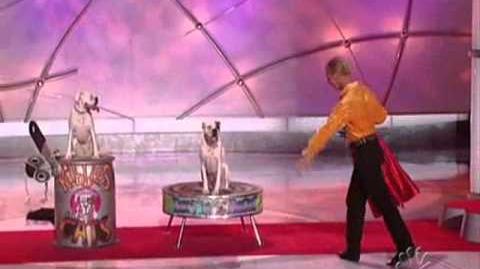