America's Got Talent Wiki
Register
Don't have an account?
Sign In
Advertisement
in: Acts, Male Singers, Instrumentalists,
and 5 more

Auditions
Jake Keeble was a singer and pianist from Season 13 of America's Got Talent. He was eliminated in the audition round.

Born and raised in Georgia, I have grown up around Atlanta and work at a concert venue called Terminal West in west Midtown. Music has always been my greatest passion and the entertainment industry excites me. Music is the universal language and I am fortunate enough to be able to speak that language, and translate it for others.


What inspires me the most, is to see someone wake up everyday loving what they do. That cheerful attitude creates a ripple effect for those around them. Work ethic, modesty, and a positive attitude impacts others as well yourself, and the people that have accomplished that inspire me the most. [1]

Jake's audition in Episode 1304 consisted of singing Disclosure feat. Sam Smith's "Latch", while playing the piano. Simon Cowell commented that a pop star must have personality and confidence, alluding that he lacked in those areas. It is likely he and at least one other judge voted "No", eliminating him from the competition. 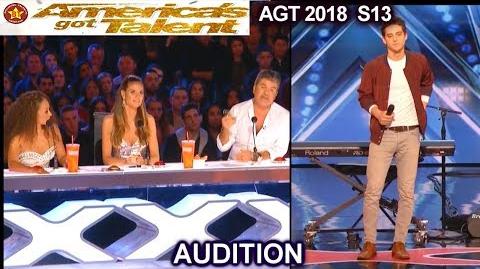