America's Got Talent Wiki
Register
Don't have an account?
Sign In
Advertisement
in: Acts, Instrumentalists, Rejected Acts,
and 12 more

Jay Jay was a student at the time of his Season 4 audition.

Jay Jay Phillips is from Cleveland, Ohio. In 2009 and 2010, Phillips competed in the Tri-C High School Rock Off with his metal band, Hysteria, from Riverside High School. He was the keyboardist of the band. [1]

In his day job, he works in a fiberglass-type factory pushing buttons. He went through a traumatic heartbreak with a girl named Amber, who dumped him.

Jay Jay's audition in Episode 401 consisted of playing an original piece he referred to as a "monster mamma jam" on the keyboard. Piers Morgan and Sharon Osbourne both buzzed the act. Piers, Sharon, and David Hasselhoff all voted "No", eliminating Jay Jay from the competition.

Jay Jay returned to Season 8, where he made it through the auditions in a 3-1 vote (Mel B being the dissenter), but did not compete in the Vegas Round. His audition was not televised.

Jay Jay Phillips' audition in Episode 1204 consisted of playing Joan Jett & the Blackhearts' "I Hate Myself for Loving You" on the keyboard. Heidi Klum buzzed the act, claiming she expected him to sing. Although Heidi voted "No", Howie Mandel, Mel B, and Simon Cowell voted "Yes", sending Jay Jay to the Judge Cuts.

Jay Jay Phillips' Judge Cuts performance in Episode 1209 consisted of playing Scorpions "Rock You Like a Hurricane" on the keyboard. Jay Jay's performance was not strong enough for the judges to send him to the Quarterfinals, eliminating him from the competition along with Aileen George and Shemika Charles. 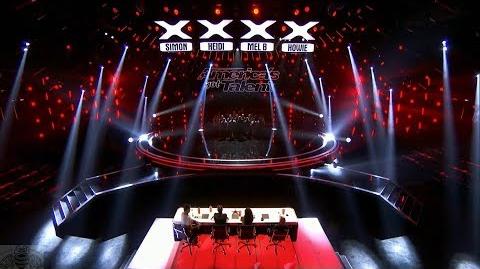 Jay Jay Phillips passed away in November, 2021 from Covid-19.