America's Got Talent Wiki
Register
Don't have an account?
Sign In
Advertisement
in: Acts, Acrobats, Rejected Acts,
and 4 more

None
Jerry L. Burrell was a basketball dunker act from Season 13 of America's Got Talent. He was likely eliminated in the audition round.

Jerry L. Burrell was the frontman of Acrodunk, a basketball dunking group that reached the Semifinals on both Season 1 and Season 4 of America's Got Talent. He was also part of the Season 9 basketball dunking group SLAM! which also featured other team members from the other group, and was cut before Judgement Week. He is the third televised contestant to appear on the show three times, after Leonid the Magnificent and Christian Stoinev, and the first to appear 4.

On Season 13, he represented the USA DUNK Team.

The USA Dunk Team represents the American dunk community in international competitions. It was organized to compete at the first International Dunk Competition in Budapest, Hungary and now serves as the Performances branch of the United States FreesTYle Dunk Federation (USFDF).

The inaugural roster was made up of a little more than half veterans with 8 plus years in the game and the rest no less talented but with less experience.

The athletes were chosen based on their talent profile and videos/bio they submitted. Their passion for the sport and commitment to the development of a competitive circuit were also part of the selection process.

The team has since then accepted additional members with like minded vision and athletic ability. All amateur and professional USA dunkers that are members of USFDF are eligible to perform with USA Dunk. [1]

Jerry L. Burrell's audition in Episode 1302 consisted of performing a backflip off a basketball net onto a trampoline, and then attempting to dunk the basketball into the net. Unfortunately, Jerry landed headfirst on the ramp and fell to the ground. On his second attempt at the trick, he missed the trampoline entirely. Based on the comments from the judges after the act, Howie Mandel, Heidi Klum, and Simon Cowell all voted "No," eliminating Jerry from the competition. 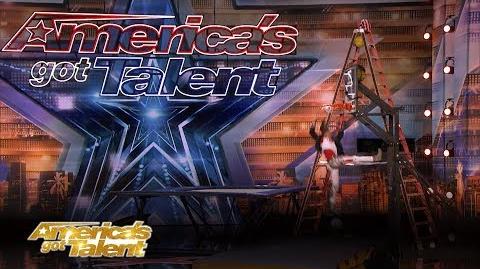 Counting all four of his Season 1 and 4 performances as part of Acrodunk, his Season 9 performance as part of SLAM!, and his solo performance in Season 13, Jerry is the first contestant to perform on 4 Seasons of AGT. This was later succeeded by Christian Stoinev not long after, on America's Got Talent: The Champions (Season 1).