Quarterfinalist
Jim Meskimen was a comedian and impressionist act from Season 8 of America's Got Talent. He was eliminated in the Quarterfinals.

Meskimen's impression act, Jimpressions, a two-act homage to the art of vocal mimicry, is his ninety-minute, two-act tour de force in which he relates his observations of and experiences with over 65 different celebrities, from George Clooney, to Kevin Spacey, from William Shatner to Morgan Freeman… and even Flipper. He has performed the show in Hollywood, Tampa Bay, Toronto, Vancouver, Baltimore, London, Chicago and Sydney, Australia, where audiences embraced the show.

The website for The New York Times said, “Meskimen is a very talented impressionist, but what’s most impressive here is that he not only imitates obligatory celebrities like Arnold Schwarzenegger, George W. Bush, Jack Nicholson and Jimmy Stewart but also people like George Clooney, Paul Giamatti and Ricky Gervais, celebrities you wouldn’t think were ripe for impressions until you hear his takes on them.” [1]

Jim Meskimen was one of thirty acts to advance straight to the quarterfinals in New York without performing in Las Vegas in episode 808.

Meskimen's week three quarterfinals performance in episode 814 consisted of imitating with comedy the voices and mannerisms of Joe Pesci, George Clooney, Sting, Woody Allen, Robin Williams, Dr. Phil, Robert Downey, Jr., and Jay Leno (as chosen by the judges, Nick, and Twitter) as if the actors were portraying Benjamin Franklin in movies. Jim did not receive enough votes to be sent to the semifinals in episode 815, eliminating him from the competition instead of Jonathan Allen. 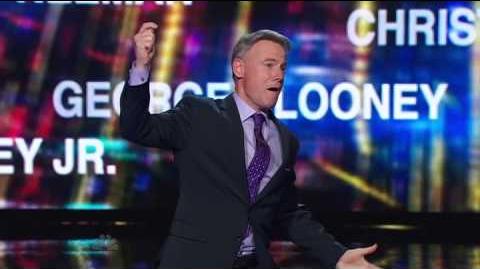