None
Joanna Kennedy was an intimacy expert act from Season 10 of America's Got Talent. She was eliminated in the audition round.

As a product of the women's move for independence and equality, Joanna Kennedy did her part and got an electrical engineering degree, an MBA, and a chance to quickly climb the corporate ladder. Outside the office, her marriage fell apart and she cried herself to sleep at night. In 2001, she found the cause of my pain – she'd buried myself away and become what everyone else wanted her to be. Shortly before leaving her corporate position, she received an inspiration, a knowing that she needed to share her realizations so that women (and the men in their lives) wouldn’t need to suffer the same pains and challenges that she and the men in her life had.

Joanna now owns and directs The Center for Happiness, Love & Pleasure where she offers private sessions, products, and workshops that help liberate men and women to be their natural selves, have passionate sex lives, and create deeply loving relationships. She is also in the process of writing a series of books including The Feminine Famine: Reigniting Your Feminine Essence and Something's Amiss in Eden: A Guide to Peace, Love, and Ecstasy.

She has become an Accredited Journey Practitioner, studying directly with Brandon Bays in the United Kingdom, and an Advanced Certified Tantric Educator, certified by Charles Muir and the Source School of Tantra. She is a graduate of Anthony Robbins’ Mastery University and Leadership Academy and has also studied Healing Touch, Neuro Stress Release, and other holistic healing modalities. Alison Armstrong, creator of the "Celebrating Men, Satisfying Woman" workshops, and David Deida, author of Intimate Communion have had strong influences on Joanna personally and professionally.

Joanna dedicates her life to helping men and women take off their masks and celebrate the magic and mystery of true being and true relationship. [1]

Joanna Kennedy's audition in Episode 1007 consisted of coaching Nick Cannon on how to kiss an audience member. Howard Stern, Heidi Klum, Mel B, and Howie Mandel all buzzed the act. All four judges voted "No," eliminating Joanna from the competition. 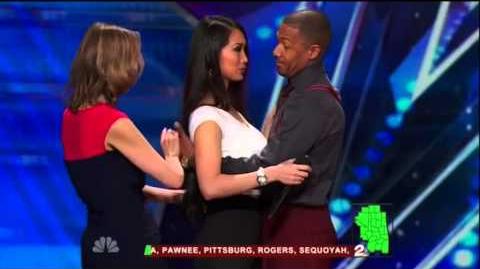