America's Got Talent Wiki
Register
Don't have an account?
Sign In
Advertisement
in: Acts, Rejected Acts, Season 2 Acts,
and 3 more

None
John Kilduff was a painter act from Season 2 of America's Got Talent. He was eliminated in the audition round.

John Kilduff is the host of Let's Paint TV , which began in 2002. John Kilduff is an exhibited artist and longtime Los Angeles resident. He received comedic training at The Groundlings, studied improv at Los Angeles City College, and attended the Otis/Parsons Art Institute. In 2008 he received a MFA at UCLA in California.

Kilduff has appeared as a guest on The Tyra Banks Show, where he painted Banks' portrait. He appeared on the red carpet for the VH1 2006 Big Awards. Kilduff was also filmed painting and jogging for a 2006 USA Network commercial.

LA Weekly notes that during most episodes of Let's Paint TV, Kilduff wears "his trademark crumpled and paint-stained Brooks Brothers suit." In order to avoid working a day job, Kilduff sells many of his paintings at art fairs around California. His paintings typically sell for between $1,200 and $3,000. He has appeared at several art shows throughout Southern California, often running on his treadmill, painting, and doing various other activities while museum patrons look on. 1

John Kilduff's audition in Episode 203 consisted of attempting to paint and mix drinks while running on a treadmill. Unfortunately, at one point, the easel tipped over. Piers Morgan and possibly the other two judges buzzed the act. At least two judges voted "No," eliminating John from the competition. 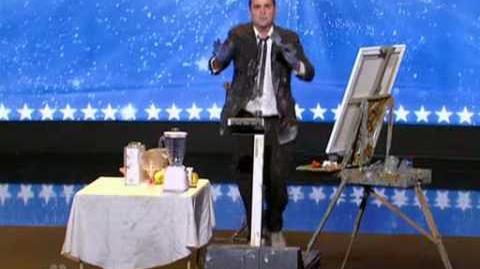