America's Got Talent Wiki
Register
Don't have an account?
Sign In
Advertisement
in: Accepted Acts, Acts, Novelty Acts,
and 3 more

John Narum was a yo-yoer act from Season 9 of America's Got Talent. He was eliminated during Judgment Week.

John Narum is a yo-yo artist from Fargo, North Dakota. He has been a veteran of yo-yo performance discipline since he was just 4 years old. Inspired by seeing a special guest on the Bill Cosby show, he simply just wanted to learn tricks with the yo-yo. His mother found out about a local yo-yo club where kids were teaching each other tricks, and Narum jumped into the loop. The group disbanded about 5 years after John first joining, and John was at the point in which he started developing his own style and tricks, having in mind a dream: to be the best yo-yo player in the world someday.

That wish came true in 2005 when Narum was crowned the World Champion, and the youngest to achieve such a title at 11 years old. After Narum won the world championship title, he was shocked and was in a stand-still on where next his yo-yo career would take him. He sought possibly more satisfaction through competition, but it backfired on him and he found himself questioning if this was the end of the road for him.

It wasn't. He started volunteering at the local Children's Hospital in honor of a friend he lost to Leukemia during elementary school, and performing all around the nation doing shows and promoting the themes of self-talent awareness and power through passion. That alone has driven him to keep pursuing new opportunities to share his journey throughout yo-yoing. [1]

John Narum's audition was never televised. It is unknown whether or not he was buzzed, but at least three judges voted "Yes," sending John to Judgment Week.

John Narum was sorted into the "Variety Acts" category in Judgment Week. His performance in Episode 907 consisted of performing tricks with a glow-in-the-dark yo-yo. John's performance was not strong enough for the judges to send him to the Quarterfinals, eliminating him from the competition in Episode 908. 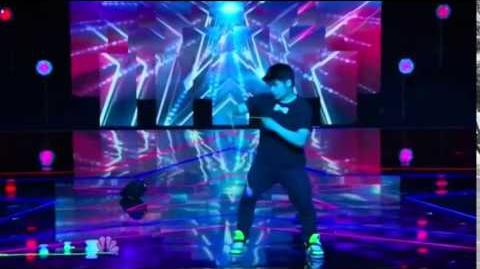