America's Got Talent Wiki
Register
Don't have an account?
Sign In
Advertisement
in: Acts, Accepted Acts, Animal Acts,
and 11 more

Judge Cuts
Jokgu was a piano playing chicken act from Season 12 of America's Got Talent. She was later joined by a partner chicken, so the act became Jokgu and Aichan. This duo was eliminated in the Judge Cuts.

Jokgu of the Flockstars is a 2 year old buff brahma bantam chicken whose video playing "America the Beautiful" went viral. She has now appeared on tv shows, in numerous news articles, and even has her own line of e-greeting cards and Flockstars apparel.

Jokgu lives in Germantown, Maryland, along with her owners, Shannon Myers and Seiree Arii, and her band of chicken sisters, "The Flockstars." They spend their happy days dust bathing, scratching around, laying eggs, and playing on their toy instruments. [1]

Jokgu's audition in Episode 1201 consisted of playing "America the Beautiful" on the piano. Howie Mandel, Mel B, Heidi Klum, and Simon Cowell all voted "Yes," sending Jokgu to the Judge Cuts. 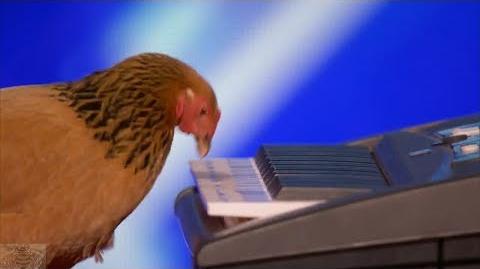 Jokgu's Judge Cuts performance in Episode 1208 consisted of attempting to play Steppenwolf's "Born to be Wild" on the piano with her sister, Aichan. Unfortunately, both chickens refused to play the pianos in front of them despite the prodding of their owners. Howie Mandel, Mel B, Heidi Klum (reluctantly), and Simon Cowell all buzzed the act, automatically eliminating Jokgu and Aichan from the competition.