Jon Call, also known as Jujimufu, was an anabolic acrobat act from Season 11 of America's Got Talent. He was eliminated in the Judge Cuts.

Jon Call is known as Jujimufu, but most know him as the anabolic acrobat. Many people might have discovered him because he is the the guy who did the weighted chair split videos that went viral.

He lives in the United States in the state of Alabama and has been training and dieting since 1999. In 2000, he started teaching himself something called tricking (tricking is an aesthetic blend of flips, twists and kicks). In 2002, he launched the website trickstutorials.com where he grew the largest community of online tricksters outside of social media. As he grew into an adult, he began to combine his tricking talents with recreational bodybuilding and strength pursuits: the result is Acrobolix. The name Acrobolix is a play on the words Acrobatic and Anabolic. [1]

Jon Call's audition in Episode 1102 consisted of ripping his shirt off, pressing a heavy weight while performing a split across two chairs. He then pressed Heidi Klum in the splits. Howie Mandel, Mel B, Heidi Klum, and Simon Cowell all voted "Yes," [2] sending Jon to the Judge Cuts. 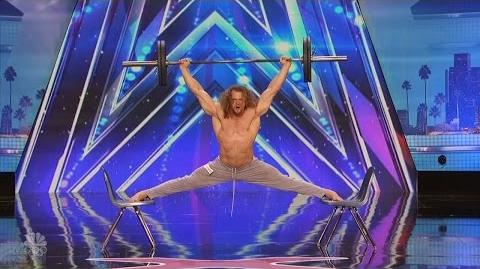 Jon Call's Judge Cuts performance in Episode 1107 consisted of swinging from a rope, flipping into a chair, wrestling and spinning somebody in a gorilla suit, and heaving a woman onto a mat in front of him. Jon's performance was not strong enough for the judges to send him to the Quarterfinals, eliminating him from the competition along with Philippe and Marie-Lee, instead of The Passing Zone. 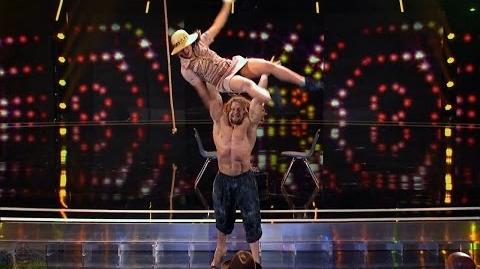 Retrieved from "https://agt.fandom.com/wiki/Jon_Call?oldid=144996"
Community content is available under CC-BY-SA unless otherwise noted.