America's Got Talent Wiki
Register
Don't have an account?
Sign In
Advertisement
in: Acts, Accepted Acts, Contortionists,
and 4 more

Judge Cuts
Jordan McKnight was a contortionist act from Season 10 of America's Got Talent. She was eliminated before the Judge Cuts.

Jordan was born in the U.S., and currently lives in Las Vegas. Jordan started performing as a rhythmic gymnast in New York City, and became a member of the Youth National Team. She has trained with renowned Cirque du Soleil performers, and choreographers. Jordan is also modeling for a duo and individual sculptor for Richard MacDonald. She has won 3 bronzes and a silver award at different international circus festivals. Jordan has the unique ability to perform five contortion disciplines: back bending, front bending, hand balancing, twisting, and dislocation. ﻿ [1]

Jordan McKnight's audition in Episode 1007 consisted of performing contortion feats such as bending her legs over her head while standing on her hands and bending her head behind her back. At least three judges voted "Yes," sending Jordan to the Judge Cuts round. 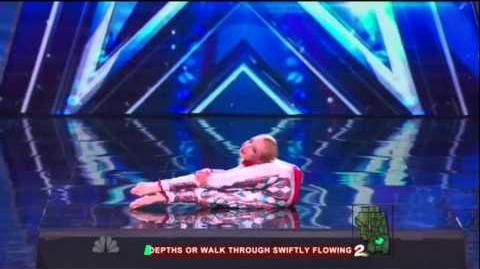 Jordan McKnight did not perform in the Judge Cuts round, meaning she either withdrew or was cut by the judges before this stage of the competition.

In 2019, Jordan McKnight was a contestant on CBS's The World's Best, a similar talent competition show. She was eliminated in the Battle Rounds, losing to magician Justin Flom.