Judgment Week
Josh Orlian was a comedian from Season 9 of America's Got Talent. He was eliminated during Judgment Week.

Josh Orlian is from White Plains, New York and was in 6th grade during his audition. He is always writing jokes, even during class. Before his audition, he only performed for friends and family. In addition to his interest in comedy, Josh spent years studying circus arts and is an accomplished unicyclist and juggler. He also plays piano and can often be heard playing the music of his favorite band, the Beatles.

Performing on America's Got Talent was truly a dream come true for Josh. As he repeatedly said on the show, AGT has been his favorite TV show for several years. When the taping of the live shows moved to the east coast in 2012 starting with season 7, Josh attended many shows and waited anxiously afterwards to meet the contestants. When attending a show at Radio City Music Hall in 2013, Josh told his father, "Next year, I am going to be on the show." After preparing and practicing his comedy routine, Josh attended the AGT auditions at the New Jersey Performing Arts Center in Newark, New Jersey, and his prediction came true.

Josh Orlian's audition in Episode 904 consisted of raunchy jokes about getting a physical by a doctor, his first date being allergic to nuts, and wanting to learn how to swallow swords. The crowd gave Josh a standing ovation and judges Howard Stern, Heidi Klum, Mel B, and Howie Mandel all voted "Yes," sending Josh to Judgment Week. 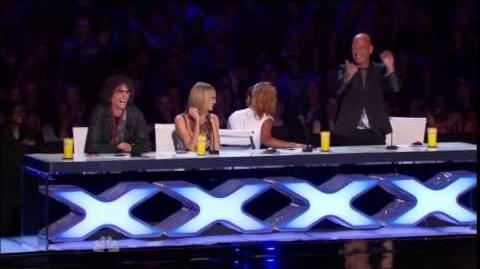 Josh Orlian was sorted into the "Comedians" category in Judgment Week. His performance in Episode 907 was not televised (he was sighted with his competition). Josh's performance was received well by the judges but he was not sent to the Quarterfinals at Radio City Music Hall, eliminating him from the competition.