Semifinalist
Junior New System was a dance group from Season 13 of America's Got Talent. They were eliminated in the Semifinals.

The internationally-acclaimed all-male hip-hop dance group Junior New System was originally formed in 2009, when its members were only in their prepubescent to early teen years. This was an offshoot of a slightly older dance group, the New System Dance Crew, whose members were their mentors and in some cases actually their older brothers, hence the name. The group’s members, all from very humble (even impoverished) backgrounds, are natives of Sampaloc, Manila, and attend public schools in the vicinity. From its beginnings as a participant and frequent champion in numerous and regular street dancing competitions sponsored by barangays and other local organizations throughout Metro Manila and elsewhere in Luzon, Junior New System eventually became the two-time grand champion in the hip-hop category of “Sayaw Pinoy”, the nationwide dance festival organized by the National Commission of Culture and the Arts, in 2012 and 2013.

After a further string of championships in Philippine competitions in the course of 2014, the group’s first overseas foray was as a contestant in the Pan-Asian talent competition “Asia’s Got Talent” in Singapore in early 2015, which was its biggest break till then, and where it reached the Grand Final stage. The group’s “Asia’s Got Talent” participation provided it significant mainstream exposure back home in the Philippines and elsewhere in Asia, making it a favored performer in television programs, corporate and private events, and government-sponsored conferences in its home country and in Hongkong, Malaysia and Singapore. Its increasingly public profile led to more commendations, including an Aliw Award for Best Dance Company in 2015 and a People’s Choice Award for Best Dance Performing Group in 2016. Junior New System’s biggest achievements to-date came in July 2016, when it participated in the very prestigious World Championships of Performing Arts (WCOPA) in California, USA, where it not only took gold medals (first places) in all the performing categories that it competed in (Group Production, Hip-Hop Dance, Contemporary Dance, and Open Dance) but was also named Senior Dance Group Champion of the World, and received the highest accolade of all, Senior Grand Champion Performer of the World. Today, Junior New System’s members’ ages range from just 16 to 23 years, appropriate enough for its name, but belying its more than seven years (and counting) of consistently increasing artistic excellence and consequent critical acclaim and public admiration. [1]

Junior New System's audition in Episode 1301 consisted of at first dancing and doing flips and then doing the same but with high heels on. Howie Mandel, Mel B, Heidi Klum, and Simon Cowell all voted "Yes," sending Junior New System to the Judge Cuts. 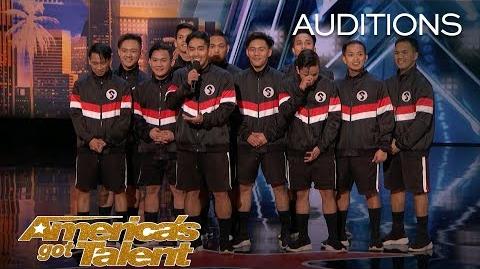 Junior New System's Judge Cuts performance in Episode 1307 consisted of performing a dance routine to a medley of songs including Queen's We Will Rock You, Jennifer Lopez's Let's Get Loud and The Black Eyed Peas' Pump It. Members of the group danced in high heels in the latter half of their performance. Howie Mandel, Mel B, Heidi Klum, and guest judge Ken Jeong gave them standing ovations. Their performance was strong enough for the judges to send them to the Quarterfinals along with Us the Duo. 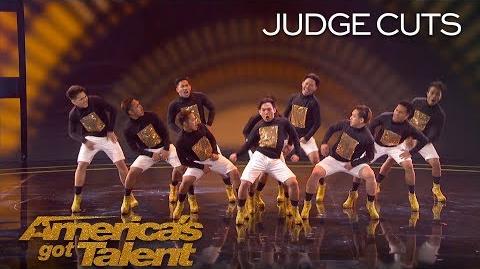 Junior New System's Quarterfinals performance in Episode 1311 consisted of performing a dance routine with a sports theme which included a drumline at the beginning. Mel B, Heidi Klum, and Simon Cowell gave them standing ovations. Junior New System finished in sixth, seventh or eight place in America's Vote. In the Dunkin' Save, they received fewer online votes than Angel City Chorale. In the Judges' Choice, Howie Mandel and Mel B didn't vote for them, but Heidi Klum and Simon Cowell did, forcing a tiebreaker; whichever act had received more votes from America would progress. They received more votes than Mochi, advancing to the Semifinals in Episode 1312. 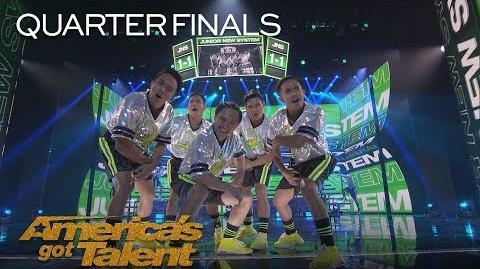 Junior New System's Week 1 Semifinals performance in Episode 1317 consisted of dancing a routine with a basketball theme, performing the first part in heels and the second half barefoot. Howie Mandel, Mel B, Heidi Klum, and Simon Cowell all gave them standing ovations. The group did not receive enough votes to advance to the Finals in Episode 1318, eliminating them from the competition along with Front Pictures instead of Zurcaroh. 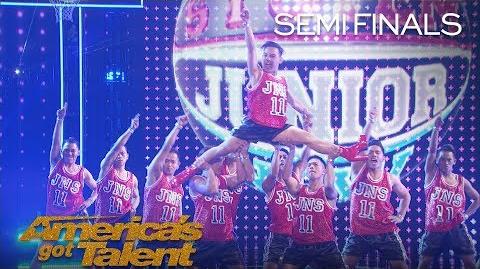 In 2019, Junior New System competed on the World's Got Talent special held in China. They were the winners of their Preliminary, sending them to the Semifinals. Junior New System ended up being eliminated in that round, after losing to Danylo and Oskar.