Judge Cuts
Kacey Jones was a comedy singer/guitarist act from Season 10 of America's Got Talent. She was eliminated in the Judge Cuts.

Audiences have been laughing with Kacey Jones for decades and laughing right along with them are People Magazine, USA Today, GAC & CMT Television, and Garrison Keillor and "A Prairie Home Companion." “Donald Trump’s Hair,” is the hilarious follow-up to her previous album, “Nipples to the Wind" and contains fifteen tracks including "Christmas in Rehab," "I Can Always Get Skinny But You'll Never Be Tall," and "Whatever Happened to Kenny Rogers Face."

If it all seems off the wall, it's totally sane in the world of Kacey Jones. Hers was, after all, themind that conceived one of Nashville's most unique and revered cult acts, the all-girl group, "Ethel and The Shameless Hussies," who broke above the waves in the late 80's to mainstream nominations as "Comedy Act of the Year" on MCA Records. As lead singer and lead comedy writer, Kacey put the Shameless Hussies on America's national radar.

In 1997 Kacey signed with Curb Records and recorded one of the few original music-with-comedy-albums ever released by a female artist in Nashville. "Men Are Some of My Favorite People," considered a classic by collectors, yielded two music videos, "1-900-Bubba" and "I Hate Your Lousy, Rotten, Stinkin' Guts But, I'm Not Bitter.

Further proving that her talents could produce more than just a few good laughs, Kacey entered the studio with legendary cult artist, Kinky Friedman, only to emerge as the producer of his critically acclaimed project, "Pearls in the Snow." Featuring Willie Nelson, Dwight Yoakam, Tom Waits, Lyle Lovett, Delbert McClinton and others, the album reached the # 1 spot on the Americana radio chart in 1999. In 2000 Kacey and Delbert McClinton recorded the duet, "You're The Reason Our Kids are Ugly." The single and video stayed atop the European country chart (#1) for nine weeks.

Movies were next to fall under her spell. Kacey contributed three original songs to the soundtrack of the multi-award winning cult film and TV series, "Sordid Lives" starring Beau Bridges, Olivia Newton-John, Delta Burke, Beth Grant, Bonnie Bedelia, and Leslie Jordan. She also wrote the music for the hilarious stage play, "Nipples to the Wind" and toured with the company nationally in 2007.

Kacey is the “Official Songstress of The Sweet Potato Queens” an organization with 75,000 members worldwide, born out of a half dozen best-selling Sweet Potato Queen books by Mississippi author, Jill Conner Browne. [1]

Kacey Jones' audition was never televised. It is unknown whether or not she was buzzed, but at least three judges voted "Yes," sending Kacey to the Judge Cuts round.

Kacey Jones' Judge Cuts performance in Episode 1011 consisted of singing an original comedic song titled "Every Man I Love Is Either Married, Gay, Or Dead" while playing the guitar. Kacey's performance was not strong enough for the judges to send her to the Quarterfinals, eliminating her from the competition along with Aaron Smyth and Leroy Patterson. 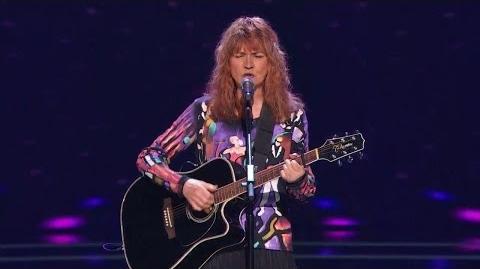