Judgment Week
Kamikaze Fireflies was a comedy danger duo from Season 9 of America's Got Talent. They where eliminated during Judgment Week.

The Kamikaze Fireflies is a Los Angeles based two person vaudeville act that aims to make its crowd laugh.

Rob Williams (formerly of The Flaming Idiots) and Casey Martin (formerly of the acrobatic show Barely Balanced) combine their years of learning strange tricks in a display of the vaudevillian arts. 1

The Kamikaze Fireflies' audition in Episode 903 consisted of Rob who stood on Nick's shoulders juggling flaming batons with Casey who stood on the rails of a shopping cart. Howard Stern, Heidi Klum, Mel B, and Howie Mandel all voted "Yes," sending the duo to the Bootcamp Round. 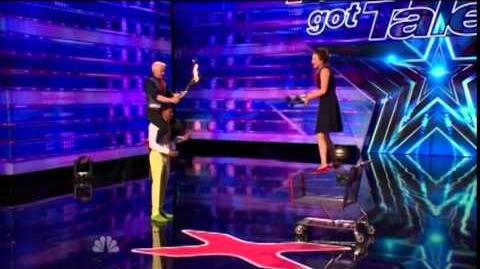 It is unknown whether or not Kamikaze Fireflies was present during Judgment Week as it was never seen, but even if it was, it did not advance to the Quarterfinals.