America's Got Talent Wiki
Register
Don't have an account?
Sign In
Advertisement
in: Acts, Accepted Acts, Female Singers,
and 3 more

Vegas Round
Kat Williams was a singer act from Season 3 of America's Got Talent. She was eliminated in the Vegas Round.

Kat Williams is an ex-prison officer. In 1997, Kat moved to Asheville, NC and soon took the town by storm, becoming the most sought-after singer in the region. She bared her soul to the crowd. Years later, Kat’s musical philosophy is “I have no competition- I can only give you the best of me.” Filled with a passion for song, an animated style and a spirited sense of humor, Kat takes the stage.

Kat has performed with solo pianists, big bands, and full symphony orchestras. She sang the score to a ballet production of Porgy and Bess to rave reviews. Out of hundreds of people who auditioned, she was chosen to open for Jay Leno on his comedy tour of the area. She was the 2002 Grand Marshal for the City of Asheville Christmas Parade. She starred Off-Broadway in the original play, “Mother Divine” . She was the featured performer at the wrap party for the movie Patch Adams starring Robin Williams, sang the National Anthem for an event featuring Gen. Colin Powell. In 2008 she opened two shows in California for Chaka Kahn. 1

Kat Williams' audition was never fully televised, but it consisted of singing Peggy Lee's "I'm a Woman." It is unknown whether or not she was buzzed, but at least two judges voted "Yes," sending Kat to the Vegas Round.

Kat Williams was one of the Music Acts in the Vegas Round. She was sorted into the "Female Singers" category. Her performance in Episode 308 consisted of singing "Let the Good Times Roll." Kat's audition was not strong enough for the judges to include her in the Top 60, eliminating her from the competition that same episode. 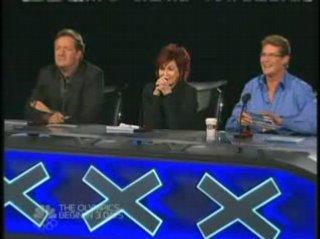 Kat was nominated by the Christian Music Hall of Fame for a Visionary Award as 2009 Urban Performer of the Year for her work with local musical youth on PBS. In 2010 Kat had the honor of singing the National Anthem for President Bill Clinton. In 2012 Kat was nominated for an Emmy for her contribution to the “Hands of Hope” project. A triple threat, Kat Williams is a singer, actress, and songwriter. She can perform Jazz, Blues, Motown, R&B, Rock, Pop and Gospel. She is loyal to her many fans, maintaining personal friendships with many of them. She is truly a remarkable woman and an electrifying and unforgettable performer. 2