America's Got Talent Wiki
Register
Don't have an account?
Sign In
Advertisement
in: Accepted Acts, Acts, Dance Duos,
and 5 more

Kaycee & Gabe were a dance duo act from Season 9 of America's Got Talent. They were eliminated during Judgment Week.

The dance pair consists of Kaycee Rice and Gabe de Guzman. They live three hours apart from each other, so they do not rehearse together often.

Kaycee & Gabe's audition in Episode 904 consisted of dancing together to The Who's "My Generation." Their verdict wasn’t fully televised, but, although Howie Mandel voted "No", Mel B, Heidi Klum, and Howard Stern voted "Yes," sending the duo to Judgment Week.

Kaycee & Gabe were sorted into the "Kid Variety" category in Judgment Week. The duo's performance in Episode 908 consisted of dancing together to "#Selfie." Kaycee & Gabe's performance was not strong enough for the judges to send them to the Quarterfinals, eliminating them from the competition along with Byamba's Contortion Girls, Carter and Anika, and Grace Ann Gregorio that same episode. 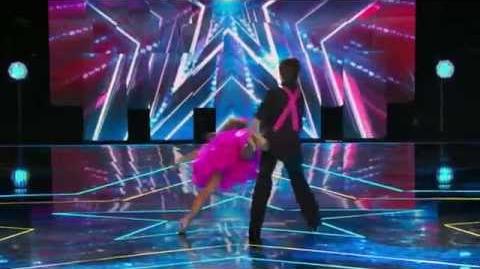 Kaycee & Sean were eliminated in the Divisional Finals.