America's Got Talent Wiki
Register
Don't have an account?
Sign In
Advertisement
in: Acts, Accepted Acts, Male Singers,
and 8 more

Judge Cuts
Kayvon Zand was a singer/pianist act from Season 10 of America's Got Talent. He was eliminated in the Judge Cuts.

A rabble rouser with a healthy dark side to match his eyebrows, Zand made waves when his Disgraceland show of raunchy rituals got him banned from New York’s Highline Ballroom in 2010. When the club instructed him to trim the show’s fake blood and fire effects, Zand responded in the only sensible way possible—he added some heavy duty sex acts! As the censorship battle became a story, Zand earned a place at the forefront of Gotham’s self-created bad boys and arty attention grabbers.

Making a scene was nothing new to Kayvon Zand. Growing up the son of Iranian doctors in Wilmington, North Carolina, he always found a catharsis in music and playacting while knowing his place was somewhere way outside the Bible Belt. He eventually bolted for Europe, where modeling proved less than fulfilling, and New York, where he finally found a home within the self-expression-obsessed club kid revival and outrageous performance arena.

“I felt this warm sense of community, where I was accepted,” Zand remembers–especially when the spotlight hit. After playing Kino 41, the Times Square club night hosted by notorious promoters Susanne Bartsch and Kenny Kenny, he appeared at rock haunts like Don Hill’s and Arlene’s Grocery and even became friends with drag star RuPaul, who promptly cast him in his 2007 Starrbooty movie, a raucous blaxploitation spoof.

The next year, Zand started terrorizing audiences with Disgraceland, which he says is like “if Marilyn Manson was pregnant with Elvis Presley. There’s a glossy kind of fun appeal and showmanship to it. It’s very s/m and fetish based, but it’s so much more macabre than Goth. It’s like a Tim Burton film with a life of its own, and it’s very fashion forward.” [1]

Kayvon Zand's audition was not televised, but it consisted of singing Soft Cell's "Tainted Love". Mel B and Heidi Klum buzzed the act. Although Heidi voted "No", Howard Stern, Howie Mandel, and Mel B (reluctantly) voted "Yes," sending Kayvon to the Judge Cuts round.

Kayvon Zand's Judge Cuts performance in Episode 1011 consisted of singing Dead or Alive's "You Spin Me Right Round" and playing the piano. Howard Stern, Heidi Klum, Mel B, and Howie Mandel all buzzed the act. When the judges were commenting on his performance, Mel B mentioned about how "his technique wasn't even there." Kayvon then replied by asking Mel B if she thought she was a better singer than him, prompting a negative response from the audience. Guest judge Piers Morgan stated in Mel B's defense that if the show was called "America's Got Obnoxious Little Brats," he would win. Aside from this, Kayvon was automatically eliminated from the competition. 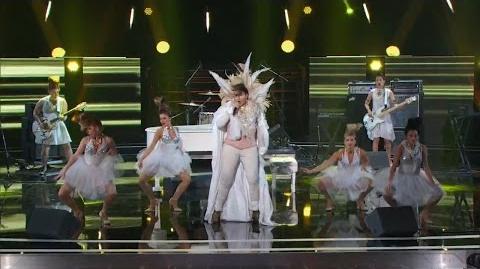