Judge Cuts
Keith Klein was a singer act from Season 10 of America's Got Talent. He was eliminated in the Judge Cuts.

Born and raised in Overland Park, Kansas, Keith Klein has always been singing. Normally shy and reserved, Keith finally broke out onto the main stage by winning a Kansas City-wide competition, KC Superstar. Since then Keith has been studying at the Eastman School of Music in Rochester, NY, a highly respected school for vocal performance. Klein is a bass-baritone with experience in classical, jazz, and pop singing. [1]

Keith Klein's audition was never televised. It is unknown whether or not he was buzzed, but at least three judges voted "Yes," sending Keith to the Judge Cuts round.

Keith Klein's Judge Cuts performance in Episode 1008 consisted of singing Frank Sinatra's "The Way You Look Tonight." His performance was not strong enough for the judges to send him to the Quarterfinals, eliminating him from the competition along with Michael John, instead of Myq Kaplan. 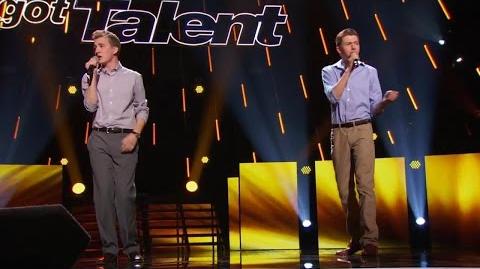