America's Got Talent Wiki
Register
Don't have an account?
Sign In
Advertisement
in: Acts, Accepted Acts, Dancers,
and 18 more

In 2001, Kenichi founded a dance group with all Japanese dancers, BiTriP. BiTriP won in the final grand championship of “Amateur Night” at the world famous Apollo Theater in 2001 as the first Japanese performer. In 2007, Kenichi appeared on dance contest of “Showtime at the Apollo” as a solo performer and became the grand champion of 2007 season after winning 7 times. Kenichi is the only two-time grand champion in the Apollo theater history.

Kenichi has been performing at many events, TV shows and teaching in the United States, Europe, Russia, China, Korea, Singapore, Japan, Morocco and Australia. Kenichi has also performed, directed and choreographed for many projects and dance and theater companies.

Ebina Performing Arts's first full-length show premiered at USA's national Kennedy Center for the Performing Arts. Also, Kenichi was invited as a speaker to TED 2007. Kenichi has appeared on the show, PBS Kids "Angelina Ballerina" as a featured dance performer. Occasionally he has been performing for high class show club, "The BOX" in NYC and London, and "The ACT" in Las Vegas. 1

Kenichi Ebina's audition in Episode 803 consisted of dancing a Matrix-inspired performance with martial arts and mime included. Howard Stern, Heidi Klum, Mel B, and Howie Mandel all voted "Yes," sending Kenichi to the Vegas Round. 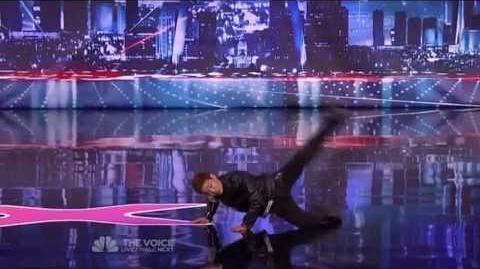 Kenichi Ebina was one of thirty acts to advance straight to the Quarterfinals in New York without performing in Las Vegas in Episode 808. 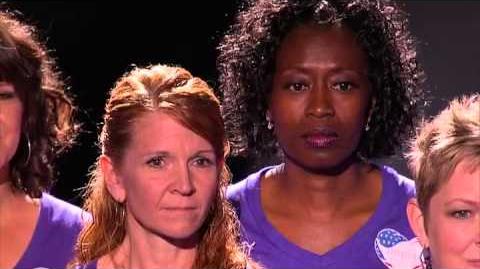 Kenichi Ebina's Week 3 Quarterfinals performance in Episode 814 consisted of dancing and miming to create the impression of him fighting monsters, swimming, encountering a fire breather, and destroying a robot. To create the illusion, a video played on a screen behind him; the video featured pre-recorded footage in which he dressed up and acted as the monsters, fire breather, and robot in a video game-themed story. All four judges responded with standing ovations. Howie Mandel claimed that Kenichi "has to win the million dollars". Kenichi received enough votes to be sent to the Semifinals in Episode 815 along with Jonathan Allen, instead of Jim Meskimen. 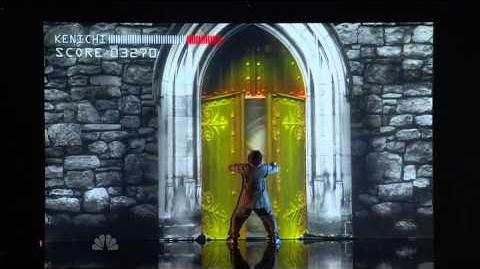 Kenichi Ebina's Week 2 Semifinals performance in Episode 822 consisted of dancing a routine in front of a pre-recorded video to create the impression of him confronting an alternate self in a mirror. All four judges gave Kenichi standing ovations. Kenichi received enough votes to be sent to the Top 12 Finals in Episode 823 instead of Illusionist Leon Etienne and Romy Low and John Wing.

Kenichi Ebina's Top 12 Finals performance in Episode 824 consisted of dancing a routine in which he told the story of him dying and being resurrected into an angel, flying into heaven, at one point portraying the illusion of him flying with flashing lights. All four judges responded with standing ovations. Kenichi received enough votes to be sent to the Final 6 in Episode 825 instead of Chicago Boyz.

For the finale in Episode 827, Kenichi Ebina danced as an introduction to Il Divo and Heather Headley singing "Can You Feel the Love Tonight?" Kenichi was revealed to have finished in first place in the competition that same night, over Taylor Williamson, Jimmy Rose, Forte, Collins Key, and Cami Bradley, winning one million dollars and a headline show in Las Vegas. [1]

Kenichi Ebina made a guest appearance in Season 9 of America's Got Talent in Episode 914 dancing in front of a screen depicting Howie Mandel and Heidi Klum dancing (their faces were overlaid onto pre-recorded footage of Kenichi). Kenichi then interacted with the footage on the screen. 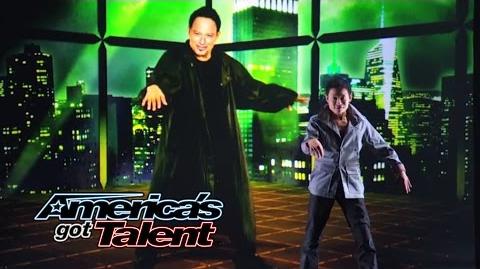 Kenichi Ebina returned for The Champions.  His performance in Episode TC04 consisted of performing a dance routine with a space age theme with graphics that matched his choreography, including two special moves that gave the illusion that he had separated parts of his body from himself.  Howie Mandel , Mel B , Heidi Klum and Simon Cowell all gave him standing ovations.  Kenichi did not did not receive enough votes to advance to the night's Top 3, eliminating him from the competition.

In 2019, Kenichi competed on the World's Got Talent special held in China. He was eliminated in the Preliminaries after being knocked out by a Chinese lion dance troupe.