America's Got Talent Wiki
Register
Don't have an account?
Sign In
Advertisement
in: Acts, Act, Accepted Acts,
and 8 more

Judge Cuts
Kenny Thomas was a motorcycle stunt performer act from Season 13 of America's Got Talent. He was eliminated before the Judge Cuts.

Falling into the pot at a very young age, Kenny became passionate about motorsports. Barely three years old and already on a motorcycle, under the benevolent gaze of his parents and grandparents. In short, the story of a hyperactive, tireless kid who learns the rules only to break them down ... What solutions to calm this indestructible youth? Sport, motorcycle, judo and outings with friends will be right, but only at high doses. Of all these things it is the bike that monopolizes all his attention, and very quickly all his life. Student life is not made for our high-powered boy. After his baccalaureate he has only one thing in mind ... the bike.

Then the discovery of another mode of expression in Trial immerses him in a new passion, the FREESTYLE!

He will then meet Julien Dupont (known as "Julz"), RedBull athlete. As part of her design studies, her girlfriend lived in Lyon. Kenny took advantage of this opportunity to settle with her and get closer to Julz, to train together. Both will quickly take the stony paths of the periphery of Lyon.

His family, friends and girlfriend insist that Kenny go after his dreams.

The first shows then take shape. It starts in France, then surveys the capitals of the world to demonstrate its know-how.

Julien Dupont appreciates this talented young man and decides to integrate him to his team "Ride The World".

Under this label hides a series of videos that combine culture and sport, a mix between the famous "I'll sleep at home" and "Nitro Circus". The idea is simple: to offer various freestylers to promote the culture of the country visited through their sport. Ride the World is also a brand of clothing for those who, therefore, do not want to take the lead with the rules!

A new adventure begins for Kenny who discovers little by little this universe and learns very quickly!

In 2016, a huge opportunity awaits him. The production of the show M6 "France has an Incredible talent" contacted him and challenged him: that of a Freestyle Show on a television 10 meters by 10. Kenny has two months to prepare for this world premiere, without the slightest assurance of success ... But it goes, and it works! In the semi-finals, he presents to juries and viewers the "FLAIR" a first in Trial and on a TV set! And it pleases, so much so that he will see himself go to the final to get the 4th place of this 11th season.

Following this incredible experience the young Kenny will enjoy a new notoriety to present a new show to his fans. But only: Kenny does not like to stay out of date. It will therefore chain all the biggest TV shows in the world.

In 2017, Kenny appeared on the fourth season of the Italian competition series Tu Si Que Vales [1]

Passing through America with the show "America's Got Talent" then Germany with the show "It's Show Time", or France with "Touche Pas à Mon" Poste "on C8 and" The World's Largest Cabaret "on France 2, Kenny has reached a total of more than 100 million viewers with his show! [2]

Kenny Thomas' audition in Episode 1305 consisted of doing tricks on a motorcycle, including driving around Howie Mandel (who was lying on the ground) and narrowly avoiding running him over, as well as riding on ramps and performing a flip. Howie, Mel B, Heidi Klum, and Simon Cowell all voted "Yes," sending him to the Judge Cuts. 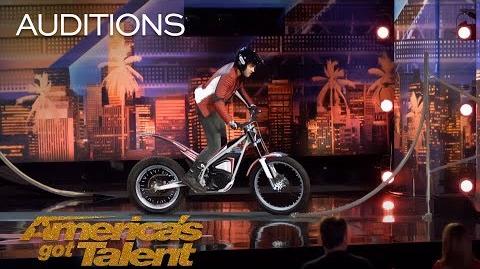 Kenny Thomas did not perform in the Judge Cuts round, meaning he either withdrew or was cut by the judges before this stage of the competition.