Kevin James was a magician act from Season 2 of America's Got Talent. He was eliminated in the Semifinals.

Kevin got interested in the art of magic at a very early age. He remembers seeing his first magic performance and how it made his 10 year-old self feel. He decided early on that performing magic for the world was going to be his life's calling. He feels blessed everyday that he can do what he loves and gets to make people happy.

Kevin's style of performance is anything but conventional. His unique comedy and magic has gained him a reputation as a world-class visual artist. His fresh approach has allowed him to headline in some of the world's top showrooms and theatres. He has performed on television in 25 countries. In the US he has performed on all the major television networks and many cable channels. Some of his past performances include starring at the Crazy Horse in Paris, a Royal Command Performance for the Prince of Monaco, headlining in Jeff Kutash's Splash at the Riveria in Las Vegas, Caesar's Palace, Tropicana and Bally's just to name a few.

Kevin is also a very prolific magical inventor. Not only is his show original, he has created many things that have been performed in the shows of other famous magicians like Doug Henning, Mark Wilson and David Copperfield. Kevin's art vision was to assemble the most unique artists on the planet, creating a very special show. He is now the star of his own comedy illusion show, boasting a cast of 30 performers.1

Kevin James' audition in Episode 203 consisted of performing a trick which involved putting together a Charlie Chaplin doll and then having it come to life as a real person. Piers Morgan, Sharon Osbourne, and David Hasselhoff all voted "Yes", sending Kevin to the Vegas Round. 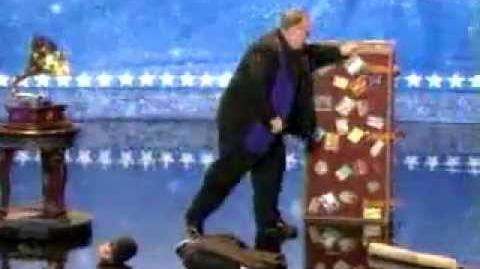 Kevin James was sorted into the "Variety" category during the Vegas Round. His performance in Episode 205 consisted of slicing an assistant in half with a chainsaw, with the two halves still moving. Specifically, one of the legs being lifted up and the torso pushing itself up from the table. In the end, the assistant was built back together. Kevin's audition was strong enough for the judges to send him to the Semifinals in Episode 206. 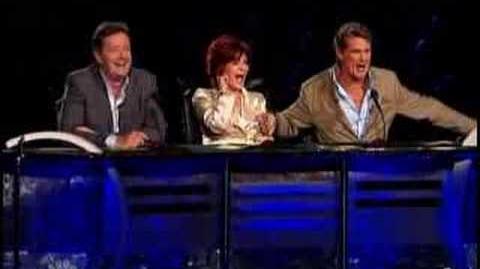 Kevin James' Semifinals performance in Episode 207 consisted of a trick involving bringing an amputated hand to life, giving it the ability to move its fingers and hold onto things. Piers Morgan buzzed the act. Kevin did not receive enough votes to be sent to the Top 10, eliminating him from the competition in Episode 208.

Kevin James was a semi finalist at Das Supertalent at 2013.

Kevin James made a guest appearance in Season 9 of America's Got Talent in Episode 916 along with The Illusionists (one of which was Season 5 act Dan Sperry). Kevin's role consisted of creating the illusion slicing an assistant in half with a chainsaw, with the two halves still moving. Specifically, one of the legs was lifted up and scratching his other knee. Then, the torso pushed itself up from the table. In the end, the assistant was built back together. 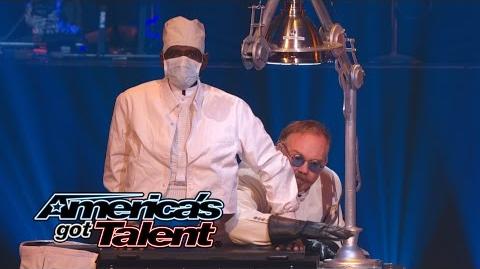