Semifinalist
Kevin Johnson was a ventriloquist act from Season 1 of America's Got Talent. He was eliminated in the Semifinals.

Kevin has been a ventriloquist nearly all his life. It all started when he was 9 years old, after his parents gave him his first pull-string dummy for Christmas. Having no formal training, he taught himself the art of ventriloquism over a 4 year period. He developed his technique from a parrot. It intrigued him that parrots could speak so clearly without the use of lips. So he re-learned how to speak all together with the use of his tongue and his throat.

Kevin was introduced to the stage by his grandfather Harley Noles, who performed magic shows throughout Colorado. He told Kevin, “If you get good enough, you can open for my show.” At the age of 13, he opened for his grandfather with a 5 minute act with a wooden puppet (Raymond), that his grandfather made for him. [1]

Kevin Johnson's audition in Episode 101 consisted of controlling through ventriloquism two bird puppets and then performing a skit called "Godzilla Theater" in which the birds and he appeared to have had their mouths moving out-of-sync with his audio. Piers Morgan buzzed the act, but he later retracted his buzz after watching the act. Piers, Brandy Norwood, and David Hasselhoff all voted "Yes," sending Kevin to the Semifinals. 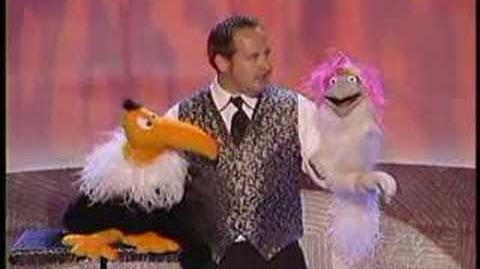 Kevin Johnson's Semifinals performance in Episode 104 consisted of performing through ventriloquism a skit about schizophrenia and microphone sound problems. Piers Morgan, Brandy Norwood, and David Hasselhoff all gave Kevin "✓" votes. Kevin did not receive enough votes to finish in at least second place in America's Vote, eliminating him from the competition in Episode 105 instead of All That! and Taylor Ware. 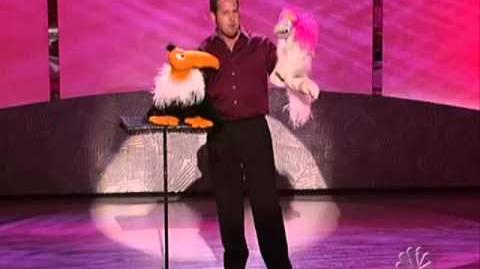 In February 2007, Kevin achieved one of his lifelong goals when he appeared on The Late Show with David Letterman. He recently finished a 9 year run at San Diego’s Legoland California Theme Park where he performed 8,824 shows. He is currently performing during the Summer Nights at Busch Gardens Tampa.

Legoland California nominated him for the Big E Awards through IAAPA and won the honor of “Best Male Performer” in 2004 and 2006! Kevin is the only performer to be recognized twice. IAAPA is the International Association of Amusement Parks and Attractions, and includes attractions from over 90 countries. [2]