Vegas Round
Kevin Shelley was a martial artist from Season 6 of America's Got Talent. He was eliminated in the Vegas Round.

Kevin Shelley's audition in Episode 610 consisted of breaking about 40 boards with his forehead. Although Sharon Osbourne voted "No," Piers Morgan and Howie Mandel both voted "Yes," sending Kevin to the Vegas Round. 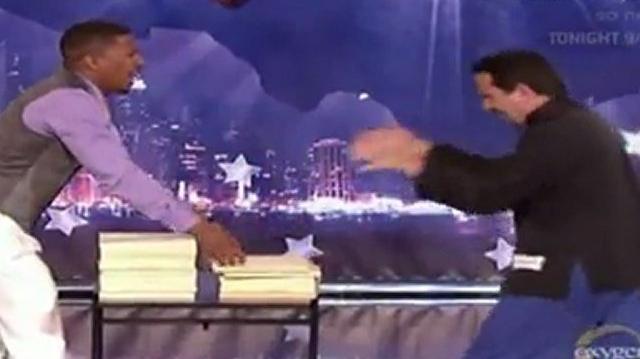 Kevin Shelley was one of the Judges' Favorites in the Vegas Round. He was sorted into the "Danger Acts" category. His performance in Episode 611 consisted of breaking flaming concrete blocks with his elbow, breaking a glass bottle with his palm, and attempting to have concrete blocks on his back broken with a sledgehammer while standing on two sword blades barefoot. His audition was not strong enough for the judges to send him to the Quarterfinals, eliminating him from the competition along with Shemika Charles.