None
Krazy George was a cheerleader act from Season 10 of America's Got Talent. He was eliminated in the audition round.

For over 40 years, Krazy George Henderson has performed in front of 25 million fans and has been seen by hundreds of millions on TV. George allegedly invented the audience wave on October 15, 1981 at the Oakland Athletics’ New York Yankees Playoff Game.

Krazy George started as a fan in the stands in 1968 at San Jose State University. For the next 7 years his notoriety grew in the San Francisco Bay Area until Lamar Hunt, owner of the Kansas City Chiefs, brought him in for one Chief’s game. Krazy went over so well, Mr. Hunt hired him full time for every home game from 1975 to 1979 and a new professional career was born.

Besides all the teams Krazy George cheers for, he’s had feature stories written about him in such magazines as “People.” He’s been a guest on many TV programs including, “Hollywood Squares” and “To Tell the Truth.”

He’s had interviews on numerous national and local radio and TV shows. September, 2003, San Francisco’s KPIX TV program, EVENING MAGAZINE, produced a large segment on Krazy George, his career, and the invention of the wave. He’s been in many radio, TV and newspaper ads as a spokesperson for teams and their products. [1]

Krazy George's audition in Episode 1005 consisted of cheerleading. Howard Stern, Heidi Klum, Mel B, and Howie Mandel all buzzed the act. All four judges voted "No," eliminating George from the competition. 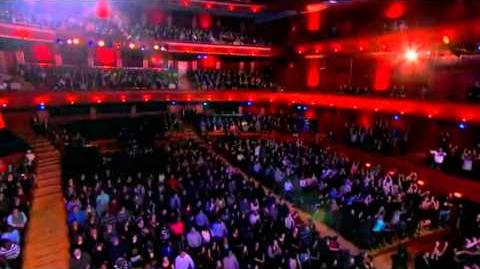