Judge Cuts
Laurent Piron was a magician act from Season 13 of America's Got Talent. He was eliminated before the Judge Cuts.

Laurent Piron, is a Belgian magician from Liège. At only 28, he has already traveled the world with his magic.

He started his international career as a street performer, entertaining crowds of all nationalities with his magic, comedy, and showmanship. He has performed over 1000 shows, amazed audiences at some of the biggest and most renowned arts festivals, such as the Adelaide and Edinburgh Fringe Festivals and the Festival d’Avignon in France.

More recently, Laurent has been touring with his theatrical show « 13 rue du Hasard » and received various prices in festivals such as the People Choice Award at the « Festival d’Avignon » and a second price in the France championship of magic in 2013.

In 2015, he participate at the world championship of magic in Italy. More recently, Laurent has created a “Magie Nouvelle” show called “Battement de peur”. [1]

Laurent Piron's audition in Episode 1304 consisted of creating the illusion of sneezing out sponge balls from his nose as well as making it appear to rain balls all over the stage and out of his hat. Mel B, Heidi Klum, and Simon Cowell voted "Yes," sending Laurent to the Judge Cuts. 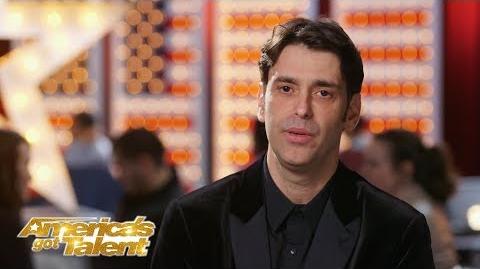 Laurent Piron confirmed that he did not make the Top 72 shortlist. [2]