Lioz Shem Tov was a comedy mentalist act from Season 13 of America's Got Talent.  He was eliminated in the Judge Cuts.

Lioz Shem-Tov is a comedian from Israel.

He has performed for the last 19 years, and appeared on many TV shows, locally, and around the world.

Starting his career in 2001, with daily performances in comedy clubs, in 2008, Lioz was invited to perform on NBC's "Last Comic Standing", where he reached the semifinals, that were held in Las Vegas. Through the years, Lioz perfected and fine-tuned his comedy style, while in the meantime, regularly performing in a standup comedy TV show, aired on "Nickelodeon" Channel. In 2014, Lioz was invited to participate in a big standup comedy competition, titled- "Funniest Person In The World", at the world famous comedy club "The Laugh Factory" in Los Angeles, where he reached to the finals. In 2018, Lioz  was invited to perform in "Israel's Got Talent". He reached the Semifinals.

After the "Israel's Got Talent" appearance,

Lioz was invited to perform at "America's Got Talent"

Lioz's AGT's performances were hilarious, and got more then 100 Million views on social networks.

After AGT Lioz performed on additional notable TV shows, around the globe, such as:

In early 2019, he was invited to perform in "Australia's Got Talent", where he reached the Finals.

Following his performances in Australia, he was also invited to perform in "La France A Un Incroyable Talent" ("France's Got Talent")

Lioz, now recognized by many as an International Comedian, brings his hilarious show to audiences worldwide.

Lioz Shem Tov's audition in Episode 1304 consisted of using "telekinesis" to perform feats such as shooting the top of a foam ice cream cone out of place, causing a tape measure to stay in place, blowing bubbles, catching one, and then making it disappear in his hand, pulling tissues out of a tissue box which magically made more sheets appear under them, and then finally, using his "mind powers" to cause the top of a trash can to slowly raise. Heidi Klum and Simon Cowell buzzed the act. Although Heidi voted "No", Howie Mandel, Mel B, and Simon (who later retracted his buzz) voted "Yes", sending Lioz to the Judge Cuts. 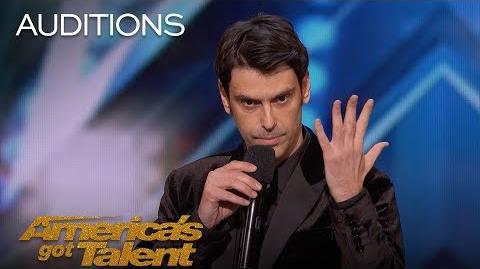 Lioz Shem Tov's Judge Cuts performance in Episode 1308 consisted of transforming a rubber glove into various shapes, having Mel B pick a card from a deck and choosing said card, switching the deck of cards to an empty set and making a doll move. Howie Mandel, Simon Cowell and guest judge Olivia Munn gave him standing ovations. His performance was not strong enough to advance to the Quarterfinals, eliminating him from the competition along with Human Fountains.

In 2019, Lioz competed on the ninth season of Australia's Got Talent. He was eliminated in the Top 10.

He then competed on Season 14 of La France a un incroyable talent, where he was eliminated in the Judge Cuts.

Retrieved from "https://agt.fandom.com/wiki/Lioz_Shem_Tov?oldid=162221"
Community content is available under CC-BY-SA unless otherwise noted.