America's Got Talent Wiki
Register
Don't have an account?
Sign In
Advertisement
in: Acts, Accepted Acts, Danger Acts,
and 8 more

Quarterfinalist
Lord Nil was an escape artist from Season 13 of America's Got Talent. He was eliminated in the Quarterfinals.

Lord Nil, born in Italy, writer and illusionist. After his studies in IT (Information Technology) and a university degree in International Political Science, he chooses to follow the path of Illusionism and Escapology. He travels through Italy, Europe, Oceania and Asia to study languages and cultures of different countries: not by chance he speaks Italian, English, Spanish, French and Chinese.

After his permanence in Madrid, he moves in China where, alongside his job as english and spanish teacher and a contract as professional consultant for Buyang Group Co ltd, he spends two years refining his skills in combat sports following overwhelming physical and mental trainings from which he will take advantage in his future escapology's experiments. Escapology is the art of escaping from chains, padlocks, handcuffs, straightjackets, prisons and more.

Improving his fighting technique in China, in 2003 he wins the Italian championship of Chinese full contact (Sanda) and in 2007 enters in the Italian National team. It is in his Asian period that Lord Nil gets close to the world of Illusionism.

In September 2010 Maya, joins Lord Nil's team during his studies as professional dancer which she will complete in Milan, at the dance academy S.P.I.D (Scuola Professionale Italiana Danza) in June 2012.

In January 2013 Lord Nil and Maya reach the top of their artistic career competing with all the young best illusionist in the world, in the TV program: “La Grande Magia – The illusionist”. There they meet the masters of Illusionism like Jeff McBride, Eugene Burger, Paul Wilson, Xavier Mortimer, Aaron Crow and others.

In the same year, they're committed to a winter tour in Oceania and to a summer tour in Greece, Cyprus, Balearic Islands, Turkey performing their show of mentalism “The Sixth Sense emsg” and their illusion show “Escape and Freedom”. In September 2013 they're part of the TV program “La France a un Incroyable Talent”.

In February 2014 they decide to embrace the fascinating world of circus, working with the most important names of Italian and international panorama like Vinicio Togni. In October 2014 they present at XVI° Edition of International Circus Festival – Città di Latina, “Odysseus”, in its world début: a new concept of illusionism inspired by their friend and mentor, the psychiatrist Matteo Rampin.

Between 2015 and January 2018, Lord Nil and Maya continue their European tour working in big productions like Zoppis production, Cirque Medrano, Grand Cirque de Noel, Wonderful Christmas Circus in Italy, Greece and France. In January 2018, they're chosen to be part of the 13th season of America's Got Talent.

The other great big love of Lord Nil is literature, a passion grown alongside Magic. In 2010 he publishes with Faligi Editore seven novels from “Generals of emsg Magic” saga, with the heteronym Lord Nobody, name that he used for several years also as performer. In 2017 he publishes with Epsil Edizioni the novel “La Naturale eleganza del delitto” and in the same year the novel “Il banale inganno alla morte” with the publishing house Arduino Sacco Editore. [1]

Lord Nil's audition in Episode 1303 consisted of escaping a sealed container enclosing his head, before a box of scorpions was dumped onto his head. At one point, he dropped the knife he had planned on using, and was forced to use a back-up. Howie Mandel, Mel B, Heidi Klum, and Simon Cowell all voted "Yes“, sending Lord Nil to the Judge Cuts. 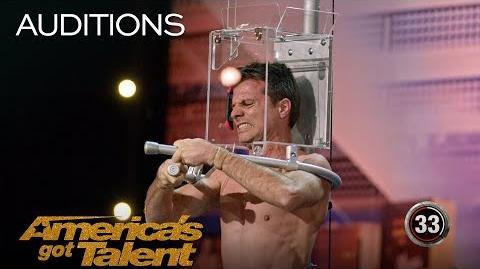 Lord Nil's Judge Cuts performance in Episode 1310 consisted of performing an escape act in which he was in a straitjacket above a cage of alligators and he had to escape before 3 ropes on fire burned through. Mel B buzzed the act. Lord Nil successfully completed the escape with only 2 of the 3 ropes breaking. His performance was strong enough for the judges to send him to the Quarterfinals instead of Sergey and Sasha. 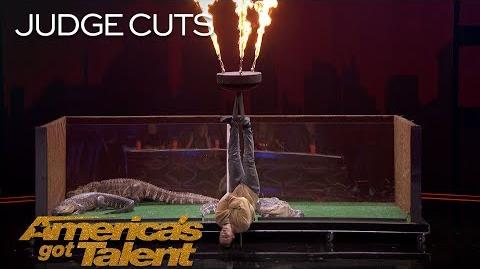 Lord Nil's Week 1 Quarterfinals performance in Episode 1311 consisted of performing an escape act where he was chained in a tank of water, needing to escape the chains in order to release his fiancée before she drops into the pit of rattlesnakes at which point she must get him a key in time to unlock himself from the tank before he runs out of breath. Mel B buzzed the act, but Howie Mandel and Simon Cowell gave him standing ovations. He did not receive enough votes to advance to the Semifinals in Episode 1312, eliminating him from the competition instead of Shin Lim. 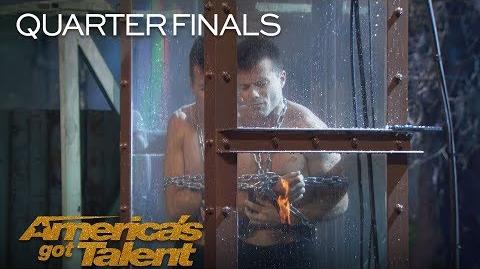 In 2019, Lord Nil returned to compete on Season 14 of La France a un incroyable talent. He was eliminated in the Judge Cuts, like he was in his first season of the show.

Also the same year he competed on the Italian competition series Tu Si Que Vales and again the following year but failed to advance to the semifinal round both times. [2][3]