Madison Watkins was a singer act from Season 11 of America's Got Talent. She was eliminated in the Judge Cuts.

Born on March 20, 1995, Madison Watkins is an aspiring artist who wants to make an impact in people's lives through music. Through her music and her everyday life, she wants to glorify Christ in everything she does. Being a good role model in the industry would be her ultimate dream and to enter in the industry with her head held high not for herself, but for the one who saved her. [1]

Madison Watkins' audition was never televised, but it consisted of singing "And I'm Telling You". Although Howie Mandel voted "no" Simon Cowell, Heidi Klum and Mel B voted "yes" sending Madison to the Judge Cuts.

Madison Watkins' Judge Cuts performance in Episode 1109 consisted of singing James Bay's "Let It Go". George Lopez and Heidi Klum gave her standing ovations. Madison's performance was not strong enough for the judges to send her to the Quarterfinals, eliminating her from the competition instead of Brian Justin Crum. 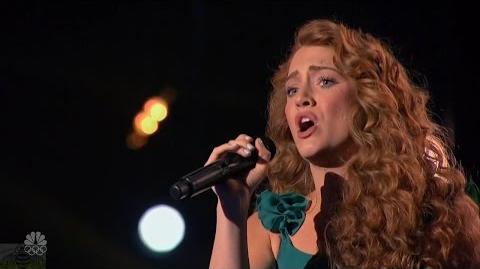 Retrieved from "https://agt.fandom.com/wiki/Madison_Watkins?oldid=149846"
Community content is available under CC-BY-SA unless otherwise noted.